This month’s chaplaincy article is by the Rev Grant Crowe, Amersfoort & Zwolle chaplain

Zechariah was filled with the Holy Spirit and prophesied: 68 ‘Praise be to the Lord, the God of Israel because he has come to his people and redeemed them. 69 He has raised up a horn of salvation for us in the house of his servant David 70 (as he said through his holy prophets of long ago), 71 salvation from our enemies and from the hand of all who hate us –72 to show mercy to our ancestors and to remember his holy covenant,73  the oath he swore to our father Abraham: 74 to rescue us from the hand of our enemies, and to enable us to serve him without fear 75 in holiness and righteousness before him all our days.’(Luke 1:67-74).

These are the opening words of the biblical song called the Benedictus – called that due to the first word of its Latin translation. The entire text – up to v79 – has two halves. The first half – as quoted above – looks back to the promises of God now being fulfilled. The second half focuses on the prophetic role of his eight day old son. We focus on this first section.

The section can be summed up in the name of Zechariah’s Son – John means ‘Yahweh is gracious’ – in this canticle Zechariah celebrates the grace of God. God is praised – because “he has come.”

He praises the Lord for the fulfilment and culmination of the Old Testament which is occurring. As Anglican Bishop NT Wright reminded us in November’s session on ‘Anglicanism and the New Testament’: the New Testament as a whole declares itself to be how the Old Testament reaches its goal and climax where the plans of God were going – a single story focused on Jesus Christ. The season of Advent therefore has a strong theme of adoration and praise – even though Anglican tradition is that we omit the Gloria in our Sunday worship! – for the fulfilment of the promises so far (that the Messiah has come), and as those promises have been fulfilled, we look forward to the glorious return of our Lord. Advent has praise woven into its fabric and being.

And two significant biblical characters are mentioned – Abraham and David. Both representing two major periods of Israel’s history – the time of the patriarchs (Abraham) and the time of the kingdom (David). Both were given significant promises – promises of grace (‘a definition of grace being: ‘we get what we don’t deserve’, while mercy: ‘we don’t get what we do deserve’). 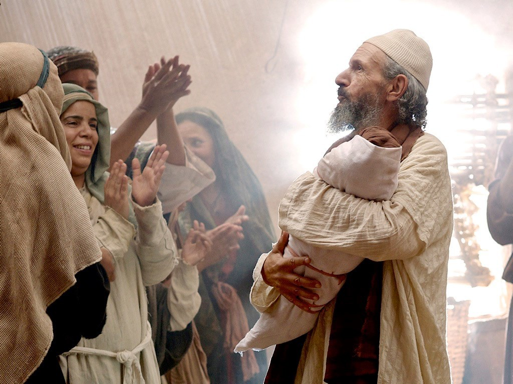 Abraham: promise of land, promise his descendants to become as numerous as sand on the seashore, and promise that “through your offspring all nations of the earth will be blessed.”(Genesis 22:v17-18). The Lord is fulfilling his ‘oath to Abraham’ – keeping his promises – and Peter declares to listening crowds, (in one of his early sermons after Pentecost): “24 ‘Indeed, beginning with Samuel, all the prophets who have spoken have foretold these days. 25 And you are heirs of the prophets and of the covenant God made with your fathers. He said to Abraham, “Through your offspring all peoples on earth will be blessed.” 26 When God raised up his servant, he sent him first to you to bless you by turning each of you from your wicked ways.’”And to David, the promise in 2 Samuel 7 that one of his descendants, from ‘the house of David’, would inherit the throne of the kingdom forever. 2000 years since the promises to Abraham. 1000 years since those promises to David. Zechariah says, “‘Praise be to the Lord, the God of Israel, because he has come!”

So, Advent – with traditionally the four Sundays focusing upon the promises to the patriarchs (first Sunday), the promises through the prophets (Second Sunday), how John prepares the way (Third Sunday), and Mary bearing the Promise fulfilled (Fourth Sunday) – draws us to praise for promises being fulfilled and the promises to be fulfilled. As we read and hear Luke’s Gospel, we are inspired, challenged, (maybe even rebuked gently?), by the four songs of praise, how Zechariah and Mary (joined by Simeon and Anna months later), join with the angels praising God for what he has done, what he is doing and what he will do. In the past Celtic Christian Church they held a full 40 days for Advent, of preparation, looking forward to the incarnation and looking forward to the new heaven and earth, matching the 40 days of fasting and prayer observed before Easter. It is possible Advent can rush by – with everything that goes on with Sinte Klaas, preparations for Christmas, Carol services, perhaps going to see family, maybe returning to a home country and so Advent can get a bit lost.

Life is hectic. We do enjoy many wonderful services. We hear lovely choir anthems. We look forward to a time of the year – Christmas – which has many fond memories for many of us.

But a suggestion…When our Season of Advent begins – as our chaplains wear purple, as the Advent candles are lit, as we hear the anthems – let’s pause again, remembering that example of an elderly man – who had so much to celebrate with the birth, in his old age, of his first son – who praised the Lord that ‘he had come’. Let us at that moment give thanks and praise, Advent showing us how God kept his promises and he will and would keep his promises to come.