This contribution is from John and Frances Murphy

During the 1939-45 war many Dutch civilians and Servicemen crossed the North Sea to join the Allied Forces in Britain. Once there they joined the various branches of the Allied Services including The Princess Irene Brigade. Naturally many men formed relationships with British women and after the war ended these men brought their brides back with them to the Netherlands. It was obvious that many men moved back to their birthplace, and consequently groups of expatriates spread throughout the Netherlands.

A group of such women met each other in the then ‘Hotel Suisse’ in Zwolle for tea and a chat. They also felt the need for a place of worship in their own language. They were encouraged in this vision by the Lutheran Church.

It was eventually decided with the help of the Anglican Church in The Hague, to explore the possibilities having a service of worship in Zwolle. The Reverend Beukes, the Anglican Chaplain in Utrecht, agreed to come to Zwolle once a month where he presided over a combined service of Holy Communion and Evening Prayer. At first, the services were held on a Thursday, but this was eventually changed to a Sunday evening. Services were held in the months January to June, then September to December. This was to enable the members to go to England, and allow their children to meet their families in England. 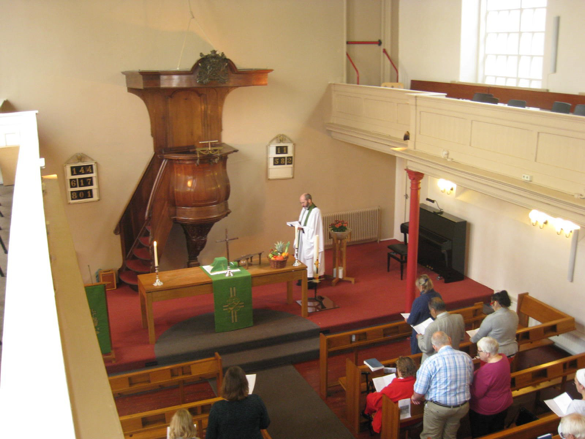 Initially there wasn’t any money to purchase hymn books and to pay for the Lutheran Church. As it became more organised, payment was made to the Lutheran Church and also a small amount to the Reverend Beukes to cover his expenses. Initially the Church in Zwolle was organised by a local British businessman, a Mr Fenton from Elberg, who saw the congregation develop with more Dutch people attending.

When the Fenton family returned to England Jack van den Berg took over the task of organising ably helped by Ruth, his wife, who had been instrumental in setting up the church with the other expatriates and with the encouragement of the Lutheran Pastor in Zwolle. The Lutheran Church in the Koestraat is still used for our services to this day. The number of services were still at one per month with the exception of July and August.

When Jack retired, first John Legg organised the church in Zwolle for a short period until his job was relocated to the south of Holland. Then John Murphy took over the responsibilities of organising the services, keeping contact with the Lutheran Church, contact with the Chaplain in Utrecht and our reader Christopher Rigg, who travelled from Bennekom, with Marjory, his wife.

At this time John decided to put the financial affairs of the church onto a more firmer footing. After discussions with Geoffrey Allen an account was opened in the name of the English Church in Zwolle. The congregation remained stable at 30- 35 and unlike today everything was arranged via telephone, letter, or word of mouth. There was a reserve list of organists who loved to come and play the beautiful organ in the Lutheran Church.

Douglas Beukes our chaplain from Utrecht, retired in 1990’s and the Bishop eventually appointed Trevor Whitfield, who was at that time chaplain to a church in Switzerland. This entailed an interregnum which was ably dealt with by the Church Council in Utrecht. Often priests came from distant chaplaincies to ensure that the Christian word was preached and Holy Communion was given.

In 2000 Trevor was moved to Paris by Bishop Geoffrey and was followed by Stephen Twycross who had previously helped during the interregnum. He came as chaplain and was helped by Peter Staples and our reader Chris Rigg.

When Stephen retired there was once again an interregnum and we were well served by retired priests always willing to step into the breach.

During this period of time two of our members, Gwen and Joop, despite being blind had for many years chose the hymns and printed them out, also making braille copies of the readings, so that they could go on the list of readers. They decided that they would move into a home for the blind to prepare them for the future and not to be a burden to their children Albert and Margriet, who were both fully sighted. They were certainly missed.

Sadly the expatriates from the Second World War and whose efforts started the church in Zwolle were gradually passing away.

Jaap was chalice bearer with John but through illness and problems with his health found travelling too much. In a blow we lost six members. As John was approaching his 70th birthday he decided the time had come to hand over the reins to others. This coincided with another interregnum. At the time of John standing down, the congregation agreed to move to holding two Sundays a month.

In 2004 John de Wit was appointed chaplain and from that time Cecilia Koppenrade took over John’s duties. John de Wit had new ideas and felt that a church leadership group should be formed under Cecilia’s leadership. This group was: Cecilia, Jonathan(who later was training as a reader and unfortunately died leaving a great gap in the team), Dave Thomas, Brian Veltman and Linda Preston.

At that time two families joined us, one from South Korea(6) and one from the United States(5).

Suddenly we had a Sunday School Formed by Pam de Wit and helped by Jeanie Hancock, Pam also played a great part in training Intercessors and readers from the bible. John de Wit was expanding his ministry and was appointed Archdeacon of Europe. At that time we were helped by Chris Nicholls who was training to be a priest and we were lucky to attend his priesting in Utrecht two years later. Then problems, we lost the two families that formed our Sunday School. One of our leadership team left to join Christ Church Amsterdam and another left to work overseas. There were two left, and luckily we found Adriaan du Toit to join the team and to act as treasurer. Then we heard that John de Wit was preparing to retire and he set the church in Utrecht a challenge to use the resources it had in mission before he left. This challenge was taken over by the new chaplain David Phillips along with his team who concluded that God was calling us to plant a new Anglican church in Amersfoort. 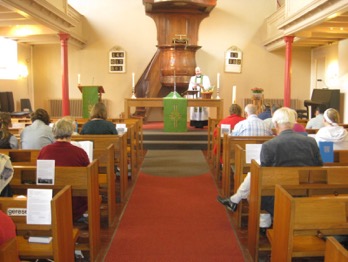 Before John de Wit left, he received news that Sam van Leer and his family were moving to Groningen and there was a opportunity of setting up a church with a non-stipendiary minister who would be Sam. This church is now established and growing – Grace Church Groningen. This was followed by the new church plant in Amersfoort – All Saints Anglican Church – with Grant Crowe as chaplain. David Phillips and Grant Crowe share the Sunday services in Zwolle – each leading one service per month. These two chaplains also attend the Zwolle Leadership Group, and are helping establish a new monthly bible group which will study the Letter to the Ephesians between now and June 2017.

As a Church, the Anglican Church in Zwolle, its main challenge is its struggle to attract young people and families as the older ones pass away. But in our challenges, we trust in God, and we aim to—a growing fellowship of believers— warm in welcome—reverent in worship— gracious in witness—and joyfully serving God and our community in and nearby Zwolle.