Read  the Bishop’s Christian Message or watch on youtube

The nine lessons and carols service from King’s College Cambridge is listened to by millions of people all over the world. It is one of England’s most distinctive and successful religious exports! For me, the service has especial resonance, because this was the college where I studied as an undergraduate and so the distinctive sound of the treble voices and fulsome reed organ stops brings back happy memories of my student life.

Eric Milner-White introduced the nine lessons and carol service in 1918. He had been appointed as Dean of King’s at the age of 34. 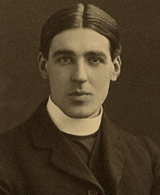 He developed the carol service because his experience as an army chaplain during the war had convinced him that the Church of England needed to introduce more imaginative worship. The nine lessons and carols format quickly became popular – and how quickly innovations become ‘traditions’!. Today it is widely copied and imitated. In our European chaplaincies ‘the carol service’ is now one of the best loved services in the whole year and is a delight for people of many different nationalities.

The beauty of our Christmas music has the ability to touch and soften the hearts of those who would not respond to a more prosaic declaration of Christian truth. But it is not enough for us to offer a delightful aesthetic experience. We long for people to encounter God! And if Milner-White were alive today, I am sure he would be urging us always to be vigilant about the need to be imaginative as we portray the extraordinary story of the birth of the Saviour – to do it, in a way that would impress upon sceptical 21st century listeners the incomparable meekness and majesty, suffering and glory of the first Christmas.

We need to feel again the shocking reality of God becoming incarnate in conditions of extreme vulnerability and deprivation. For, as the evangelists tell us, God’s Son was born in a feeding trough far from home as the first child of an unmarried, and presumably very scared young mother. From his birth he was hunted down by a mad and bad tyrant. Whilst still small, he and his parents were forced to migrate into neighbouring Egypt where I suppose they lived as refugees. I always find it striking that in Matthew’s account of Christmas, the first half of chapter 2 which relates the adoration of new-born King by the magi, is counter-balanced by the second half which graphically relates the attempts by the hostile powers of his day to end this would be King’s young life before it has scarcely begun.

2014 has been marked for many of us by commemorations of the outbreak of World War 1. It may be significant that Milner-White composed his carol service after his war-time service both in Italy and on the Western Front. He certainly knew how to reclaim beauty from brokenness. In our own time, we are massively aware of the tragedy of war. It is reckoned that about 14 million people have been displaced by the conflicts in Syria and Iraq. In Lebanon, one in four of the population is now a refugee. We Christians, whose Saviour began life as a refugee, have particular responsibilities to do what we can to help and to urge our governments to act together to provide aid. And we pray earnestly for those many men, women and children who face a winter without adequate food or shelter. It is in this sobering international context that this Christmas we celebrate in word and in song the great and wonderful mystery of the incarnation, the enfleshment, of God’s Son.

I am very aware that the Christmas season puts particular opportunities and pressures in the way of our chaplaincies. We are seeing lots of visitors who don’t normally darken the doors of our churches. At the same time, many regular church members are away at Christmas itself, visiting family or friends. So those who remain have to work especially hard to keep everything running and to provide a cheerful welcome.

Whether we have the resources of a great church or cathedral or something far more modest, it is the authenticity of what we do and the warmth of our welcome that makes the biggest impact. So to all those who sustain and enable our worship over Christmas I give my warm and sincere thanks: to our clergy, lay readers and leaders, musicians, welcomers, wardens, caterers and cleaners.

And may the God whose message of peace was sung by the angels to herald the birth of his Son, bring his peace to our hearts, our homes, our families and our world this Christmas time.