The Bishop in Europe:
The Right Reverend Dr. Robert Innes 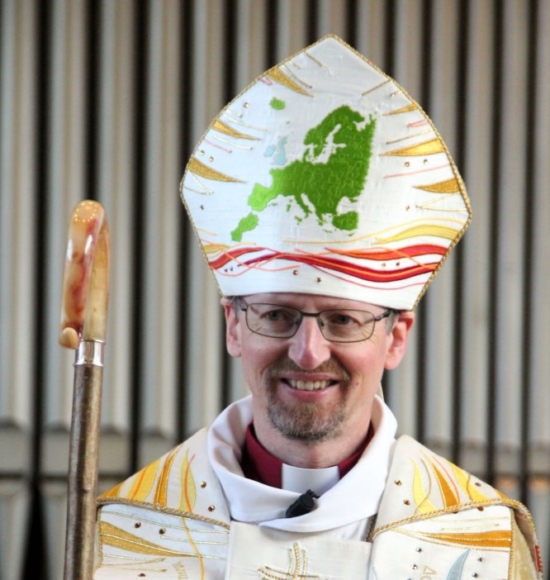 This year, the Bishop’s Lent Appeal hopes to aid the plight of unaccompanied child migrants in the Calais area. These youngsters have been reduced to sleeping rough in the open since the closure of the refugee camps last year. They are extremely vulnerable.

We hope two projects will benefit: Firstly, a safe house and outreach ministry to child migrants run by an Old Catholic monk – Br Johannes Maertens – who is a member of our congregation in Calais. The project is called Maria Skobtsova House, named after an Orthodox Saint and Martyr who took care of Russian refugees, migrants, the homeless and Jewish people in Paris during the last century. Brother Johannes asks us to help in the following words:

“As you have seen on social media the situation in Calais is getting tense and goes from worse to dramatic. It is estimated that around 600 refugees now live on the streets, parks and grasslands of Calais. The refugees are dependent on the local associations for a warm meal, clothes and sleeping bags. Refugees are often exposed to violence on the streets and their sleeping bags are taken by the police. One Eritrean refugee who speaks good French says he wants to leave France as he doesn’t feel safe anymore. ‘They treat us almost as if we are animals. I don’t feel safe here.’”

“The average age of refugees is young to young adults, some boys are only 14 years old, and girls 16. These are very vulnerable to being trafficked as they are often unaccompanied minors. The police don’t seem to distinguish between the adults and minors; they DO NOT guide the minors to the social services responsible for minors. We need an urgent Christian response to this inhumane situation.”

Secondly: In partnership with Canterbury Diocese and the USPG, we are recruiting a priest who will serve as Chaplain to the Pas-de-Calais congregations and as a refugee project officer to give pastoral support and assistance, liaising with the various NGOs and agencies present on the ground. So, the second purpose of the Appeal is to raise funds to help the new priest by having financial resources to hand to support small projects.

Being able to get out of the cold for a while and talk to a friendly face, to have help to understand the administrative system, to have help with language learning or other practical skills are all tasks that our fund could help with. Helping with these could make a world of difference to the lives of the stranded migrants in the Calais area.

Some facts: The plight of the many migrants from the horn of Africa and the Middle East, including many children without accompanying parents, who have ended up on the north coast of France is repeatedly in and then out of the news. When the news cameras move on elsewhere they do not cease to exist. If anything their plight is worse than when they are in the spotlight of media attention. The Calais Jungle Camp which was demolished in October 2016 may no longer be there, nor the official refugee camp which caught fire in Dunkirk, but the number of migrants subsisting in the surrounding area sleeping out under the trees or the stars has hardly changed. Valiant volunteers from France and Britain struggle to meet the most basic needs of these migrants (with generously donated food, clothing & blankets). But what they and the migrants themselves are urgently seeking is human warmth and hope.

In the middle of 2017, a survey of unaccompanied minors who had been living in the area on average 7-9 months was undertaken. A fifth had been there for more than a year. More than 95% had experienced police brutality. 75% had been arrested and detained for varying periods of time. More than half had experienced being woken up in the middle of the night and moved on with nowhere to go. More than a third had family in the UK but the process of getting permission for reuniting with their family was causing long delays. Less than five percent had been given any access to information about asylum law.

Please do consider how you can support my appeal.

I wish you a holy and spiritually fulfilling Lent. You can give money to this appeal through your church treasurer, who will forward money to the diocesan office or email Nick Wraight, in the diocesan finance office.