This review was written by Annemarie Huijink of the Utrecht congregation

In search of deep faith

In Jim Belcher’s book ‘In Search of Deep Faith’ we can read a story with two sides. On the one hand it is a story about a pilgrimage through Europe visiting the places and people that most influenced the Christian faith in Europe. On the other hand this is a story about a family with four young children and parents who are struggling with the question how to instil their Christian faith in their children. But before I tell you more about the book and about my opinion first something about the writer. 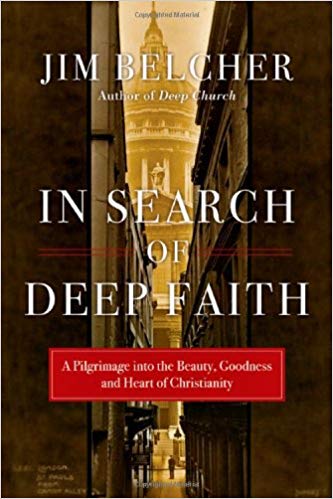 Jim Belcher announced in 2010 that he would leave the Presbyterian church he planted in 2000 in Newport Beach, California. During his time as a pastor of this church he had already written several books including: Deep Church, which won a Christian Today Book Award. Before becoming a leading pastor he was a teacher of political philosophy. Belcher is a good public speaker and during his trip through Europe made an impressive clip about Dietrich Bonhoeffer which you can find on Youtube. At the moment he is an associate professor of practical theology at Knox Theological Seminary in Fort Lauderdale, Florida and associate pastor of the community of City Church, Forth Lauderdale.

Back to 2010 Jim Belcher told his congregation that he would leave the church he planted. He worked really hard in the church and wrote a book at the same time. That took its toll and Belcher was working towards a burnout. That was the reason he and his wife decided to pack their stuff and go to Europe. So they could walk in the footsteps of several inspirational Christians who made a big commitment to their faith and visit places that were of great influence in the reformation of the church. Not only to inspire themselves but also their four children aged 11, 9, 6 and 4. Belcher read in an article that, for young people these days, it is really hard to talk meaningfully about their faith. And because it remains in vague statements they never come to a deep faith in Christ. By taking his children to Europe he hopes to awake a connection for them with their own faith to deepen it so it is more secure for the future. By doing that he also takes us on a journey by telling about some famous Christians like C.S. Lewis and less familiar ones like André Trocmé. Belcher tells their journey and how they found Christ and followed him in their own way and their own time. In all cases they touched others by their faith and actions and became great examples for other Christians.

Before I give my opinion about this book let me start by saying I am not a parent, but I am a child from a family of four children so in a way I can relate to this family. For me the parts about the different Christian people and places were really interesting. These parts can give you a good overview of their lives and impact they had. The book is full of references and when you are interested in one of the key persons it is really easy to find more information in the back. In between these parts there was the story about the family. I can really not imagine going with four children to a different continent and travel around without a clear plan. So it is easy to have a lot of respect and sympathy for Jim Belcher and his wife Michelle. The questions of the children during their travel really made me think about some parts of my own faith I take for granted a lot of the time. It also shows how difficult it is to explain to children how they can believe in God and to talk about some of the complicated consequences. Luckily there are a lot of stories that show how faith can give you hope, joy and purpose. But for example when they visit a concentration camp and talk about Bible studies within the barracks it really hit me that being a Christian can put you in a position that forces you to make fundamental decisions.

In the book you can read that the fear of Belcher and his wife for their children losing their faith when they grown up, weigh really heavy on them. I don’t know if I can fully relate to their concerns and if a journey through Europe would be a solution I would choose, but what you can read in the book is that the journey made a impact on the children. That is also the case for me. I learned a lot about different Christians whose names I sometimes already knew but not the full story and it made me think about how to be a Christian parent if I ever will be blessed with that gift. I can really recommend this book. It is inspiring for new Christians, Christians born in the religion, people who are interested in Christian faith, parents, historians and just people who love travel stories.

Jim Belcher
In Search of Deep Faith: A Pilgrimage Into the Beauty, Goodness and Heart of Christianity
Inter-Varsity Press US 2013
ISBN 9780830837748 (pbk).