This month’s Chaplain’s letter is written by the Rev. Grant Crowe, Amersfoort chaplain

He is celebrated across this world, by over 1.3 billion Christians. Publicly, and in secret, in ones and twos, in large gatherings, in all continents, across time zones, the shout Alleluia! Christ is Risen. He is risen indeed Alleluia!
Why is this so important. Five reasons why we celebrate and have concrete hope, and then Peter.

Reason 1: His words trusted – because of the empty tomb
The angel said it: “Remember how he told you while he was still with you in Galilee: The Son of Man must be delivered over to the hands of sinners , be crucified and on the third day be raised again.” (Luke 24: vv6-7)
Jesus said it would happen. He was dead when he entered the tomb.
He did not swoon or faint, and the solders did not get it wrong as they checked his body. The women did not go to the wrong tomb – else why wasn’t the body brought out by the authorities. No grave robbers robbed – they left the most valuable part, the linens behind. No if the body disappeared, the tomb was empty, it was because it had been resurrected, that is simultaneously raised and changed. He was killed and he was raised as he said he would.
Those words of prophecy were proven. We can trust his other words. The words he said about himself. To ‘have seen me is to have seen the Father’, (John 14:vv8-10), that he was the Son of God (Mark 14:vv60-62), that he was God the Son, as he told the religious, “before Abraham was born, I AM”, (John 8:58). We trust his words about himself.

His words trusted – because of the empty tomb 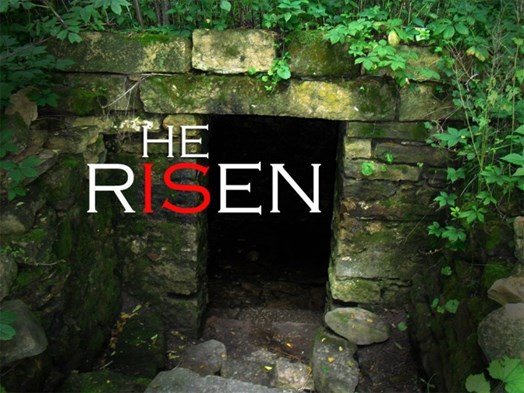 Reason 2: His promises trusted – because of the empty tomb
The resurrection means we not only trust his words about who he said he was but also trust his promises. His promise that those who believe in him will receive eternal life (John 3:16). That when he is lifted up on the cross the promise that he will draw all people to himself – his invitation is truly for all, regardless of nationality, ethnicity, class, gender, or age (John 12:vv32-34). The promise that the Spirit would be given to all who believe – he would come and live within us (see references in John 14 & 16). The promise that he would return (eg Mark 13:vv24-36)…

His promises trusted – because of the empty tomb

Reason 3: Our sins forgiven – shown by the empty tomb
The tomb is empty and so is the cross. He overcame death and it shows he overcame sin. Jesus on the cross, as we listened to the readings on Good Friday, he died for our sin. “The righteous for the unrighteous, to bring us to God” (1 Peter 3:18) as Peter later wrote. The innocent for the guilty. His death was substitutionary.
We have many football fans here, many happy Ajax fans at the moment. We all understand substitutes. To take a person’s place. He was our substitute. Jesus died in our place. We deserved to die – to be separated from God – but he died instead. “He took our place, bore our sin, died our death, so we would be freely forgiven,” (quote from John Stott, Through the Bible, p.266). And how do we know this has been done totally wonderfully? As Paul says, if he is not raised, we are still in our sins, but he has been raised. The price has been paid, death is overcome, separation from God ended, we, through Christ, are forgiven people.

Our sins forgiven – shown by the empty tomb

Reason 4: Evil overcome
On Holy Saturday, we think of what human evil did. That struck me again as I heard the readings on Good Friday. Human evil. And human evil inspired by Satan. Our Maundy Thursday reading said that the devil entered Judas, Satan the one who provoked and brought these events to finally happen. The devil sought to destroy Jesus and defeat what he thought was God’s plans. Yet Jesus is alive he is risen. Evil, its most pure form, Satan, defeated. Christ was raised. Human evil, satanic evil was overcome. And that gives us hope in life and on days such as this, when evil has shown his head again with the bombings and the hundreds injured and killed in Sri Lanka this morning. In the writings of Paul – in Romans 8:28 – for we know in all things God works for the good of those who love him – even in the most evil of events and human actions, God can work and bring good. The resurrection shows us this.

Reason 5: Hope of the resurrection – shown by the empty tomb
The women do not meet Jesus. But after Peter goes to the tomb, we know Mary meets Jesus thinking he is the gardener, (John 20). Also, when two disciples come back from the Emmaus Road discovery (Luke 24vv13-33), they are told “It is true the Lord has risen and has appeared to Simon (v34).” He was bodily raised from the dead. Changed – he would appear and leave, but physical, real, as Mary grabbed his feet, and as Jesus ate fish in their presence saying “a ghost does not have flesh and bones (24:vv38-42).” As he was raised so we will be raised when he returns. In parts of France, French Christians would go to the cemeteries on Resurrection Sunday, like today, as a statement, that fellow believers, who have fallen asleep in Christ, will be raised, because Christ was raised. And like he was raised, they will have physical bodies, and not be ghosts.

Hope of the resurrection – shown by the empty tomb

Alleluia. Christ is Risen. He is Risen indeed. Alleluia. 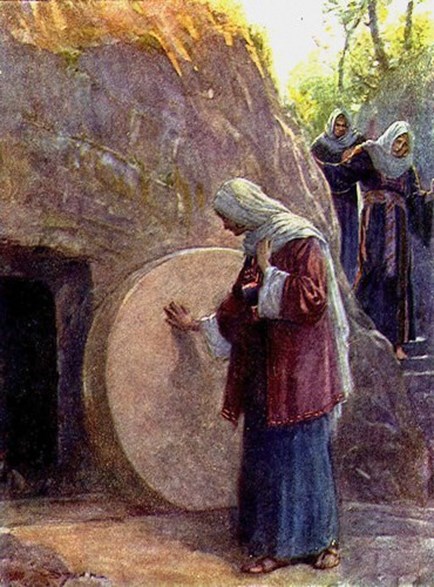 Finally. Peter.
Peter who had not gone away, back to Galilee. Why had he stayed around? Fear? Or to be close to a dear friend? Did he want to be able to go the tomb and pour out his guilt, to say he was sorry he denied him three times, that it only took the questions of people he didn’t know to make him deny the One he had spent the last three years with.
After Mary, Joanna and the others tell them their story. Peter runs to the tomb.
He sees the linen and it says he went away wondering what happened. He too didn’t remember what Jesus had said about his resurrection, what the angel had reminded the women.
But as we heard – on that day somewhere, somehow, Jesus met Peter. We do not know what happened. The end of John’s Gospel is a different event weeks later, which was a public restoration. What happened on that Easter Day, was private and personal. Between Jesus and one of his closest disciples. Peter may have thought his failure was total. His failure was final towards his Lord.
But the risen Lord met him. Jesus had died for all sin and his sins. And in this meeting, Peter is told and realises that he can be a disciple.
Maybe we are like Peter, that we have denied God, made a mess of our relationship with Him. Jesus paid for that sin as well on the cross, as well as all the others. And now Jesus lives – as the resurrection proves – to forgive all who will trust him.
Peter experienced his own personal resurrection. He was in a place of death. John’s Gospel says he actually went into the tomb. He was personally in a dark place, as he entered that tomb. Out of a place of death, came life for him. We can be in places like Peter, where spiritually it has all gone wrong, maybe our deliberate choices, or maybe by things beyond our control. What happened to Peter, says there is hope. The tomb says there is hope. Jesus met him. This day can be one of resurrection for you, whatever place you find yourself in. We have no idea what Peter did when he went away. But he found Jesus. And Jesus met him. If you are in a place like Peter, you don’t need to wander away wondering to yourself. You can come to Jesus, he will welcome you. The cross is empty. The tomb is empty. Jesus restored Peter. He will welcome you back.

Hope is really what the empty tomb gives us. A final true story.

An Anglican minister called Rico Tice shared this story:
“The first funeral of a young person I ever took was of a professional musician called Stewart Spencer, who died of cancer in his 30s.
He was a deeply committed Christian, and we became close friends, particularly after he asked me to preach at his funeral, which was personally very touching. I always remember my last visit to him.
It was three days before he died. I was feeling emotional and suddenly just blurted out what was on my mind. It was out before I knew it. I just said, “Stewart, what is it like to die?”
I will never forget his answer.
He said very calmly: “Rico, Christ is risen from the dead. He is risen.” And I could see that all his hope was pinned on that past certainty. Stewart knew that the tomb was empty.”

Hope for us because the tomb is empty… Alleluia. Christ is Risen. He is Risen indeed. Alleluia 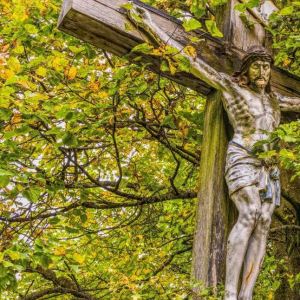