“They overcame [Satan] by the blood of the Lamb, and by the word of their testimony; and they loved not their lives unto the death.”

At this stage in Trinity season, we are being encouraged to lift our hearts and minds to the contemplation of God – that is, to a loving beholding of God. So it is most appropriate that we celebrate this Feast of St. Michael and All Angels on 29 September. Why? Because angels are between us and God. As we ascend to see the face of God, we will see the angels also or maybe even first.

If we look at the visions of prophets and of Apostles of the throne of God in heaven, in every case, that throne is surrounded by countless hosts of angels. When God told Israel to build the Ark of the Covenant, as an image of heaven on earth, he promised to be present in a special way, above the Mercy Seat, between the outstretched wings of the Cherubim. As we draw near to see God, we will see angels. Angels inhabit that realm unseen and yet not unknown. The Bible is full of accounts of angels and of their ministries. From the opening chapters of Genesis to the final chapters of Revelation, there are hundreds of verses that make reference to angels. 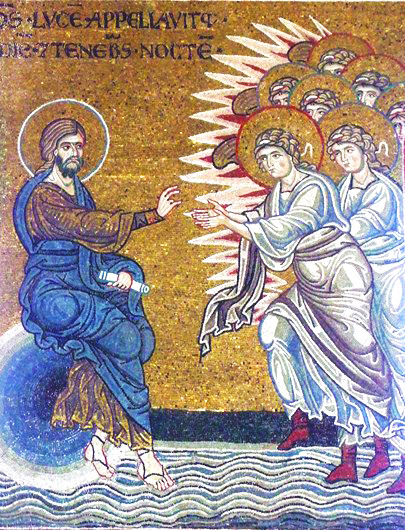 To the right you will see a picture of a mosaicfrom the 12th century in Monreale Cathedral in Sicily. It is from a series of mosaics on the six days of Creation. I point to it to show that the Church has taught through the ages that when God said, Let their be light, on the first day, it has been understood as referring to the creation of spiritual light, or the angels. The early Church Fathers pointed out the Jewish roots of this understanding by comparing the order of creation in Genesis 1 with the order of creation Psalm 148 and with the Benedicite, Omnia Opera (Song of the Three Children), a song from the Apocrypha.

In the Bible we learn that angels are spiritual creatures of a higher order than human beings. Ps 8, which has been understood as speaking of Christ’s incarnation, says, You made him, for a while, a little lower than the angels…

In the Bible, we learn that there are different species of angels forming a wonderful hierarchy which we will come to know more fully one day. Dionysius the Areopagite saw in Scripture nine levels of angels:

Angels refers to the lowest rank, but is also a term used to describe the whole angelic hierarchy.

Angels are gifted, as we are, with free will. Some have chosen to fall away from their love of God – Satan and his angels – and in that falling away they become enemies to God and to we who are God’s followers. Yet many have remained true. And so there is a battle. And the Good News is – there are many more that fight for us than that are against us!

In the Feast Day on September 29 we single out the archangel Michael, whose name means “who is like God”. We learn in the book of Daniel, that he is a warrior, who guards God’s people Israel in the Old Testament. When an angel (possibly Gabriel) speaks to Daniel (chapter 10) in a vision, he says, The Prince of the kingdom of Persia withstood me twenty one days, but Michael, one of the chief princes, came to help me. And, in Revelation, Michael and his angels are described as the guardian of the New Israel, the Church. Now there arose war in heaven, Michael and his angels fighting against the dragon. And the dragon and his angels fought back, but he was defeated. [Rev 12:7]

In Matthew’s Gospel we hear of the special ministry of guardian angels. Jesus says, “I tell you in heaven their angels [the angels of the little ones] do always behold the face of my Father in heaven.” [Matt 18:10] Jesus is saying that the smallest and weakest, the humblest, have angels that have the most direct access to the Father to guide and to seek redress for wrongs – Jesus warns us not to cross them!

From the point of view of eternity, we are told in Revelation, the battle is already won and yet as part of God’s providential ordering of creation, from our perspective in time, the battle is allowed to continue, for a while, on earth – Woe to you, O earth and sea, for the devil has come down to you in great wrath, because he knows his time is short. [Rev 12:10] Why would God allow this? This is a part of the mystery of our salvation, something to ponder further. One answer is that God’s love can bring about something better by allowing the continuance of this battle for a while, than by stopping it.

We all know something of this angelic battle at three levels:

As our minds are lifted up in contemplation, we begin to see ways our Church and societies are bound by lies. The martyrs over the centuries understood their battles were not just against the sin in individuals but against ideas that had taken a stranglehold over whole societies. To break through these lies often unleashes violence – and countless martyrs through the ages have experienced this.

In Daniel’s encounter with an angel (Daniel 10), probably Gabriel, we see the ways that angels minister, to the individual soul and to societies… Daniel was strengthened and encouraged by the touch and by the words of the angel – he was strengthened to be able to withstand in his soul a heavenly vision. Daniel was then given a message for the people of Israel in their exile – the very word angel means “messenger”. And Daniel is told that the battles he is seeing in his own time are being fought at a higher level – between the Prince of Persia, a dark angel, and the angel he is speaking with and Michael, one of the chief princes – the angels of light.

The wonder and glory and love of God is that the ultimate battle can be won at all levels – in our own souls, in our relations with others, and in the Church and society. How?

A reading in Revelation sums it up [Revelation 12:7-12]. St. Michael and all angels have won the battle in heaven and we will win by the same way – they conquered Satan and his angels by Christ, that is by the blood of the Lamb and by the word of their testimony. The battle in our souls, in our communities and in our societies are won as we wash and purify ourselves continually in the Blood of the Lamb and as we bear courageous witness in our lives to the Gospel of Truth, in other words, as we participate in that angelic battle. And again, we are encouraged and strengthened knowing that both in our own battles and in the battles in high places, there are many more that fight for us than that are against us. [see 2 Kings 6:8-23]

In the love of Christ,