WHAT: “The Abolition of Man” by C.S. Lewis
(a short work, which you can download by clicking here.)

WHEN:  THIS FRIDAY 26th MAY
6:30pm  Dinner
8:00pm  Presentation and Discussion
(let Hannah know if you are attending dinner, so we can plan: office@holytrinityutrecht.nl)

WHO:  David Dodds will lead us through the text.

This is David Dodds’ description…

On 20 February 1955, several years into a book-length correspondence with her, C.S. Lewis told an American admirer of his works (and beneficiary of his advice) who seems to have just discovered another of his books, “I’m so pleased about the Abolition of Man, for it is almost my favourite among my books but in general has been almost totally ignored by the public.” The little book publishes three lectures given almost exactly 12 years earlier, occupying only 38 pages in the original edition. They were the Fifteenth Series of the Riddell Memorial Lectures, in memory of Sir John Buchanan Riddell of Hepple, a devout Christian and onetime High Sheriff of Northumberland, and intended by the foundation which established them to explore the relationship between religion and contemporary thought. In the preface to one of his more famous books, the Arthurian science fiction novel, That Hideous Strength, subtitled, “a modern fairy-tale for grown-ups” (1945) – which incidentally gave the world at large one of its first hints of the coming of Tolkien’s The Lord of the Rings– Lewis notes that his novel “is a ‘tall story’ about devilry, though it has behind it a serious ‘point’ which I have tried to make in my Abolition of Man.” 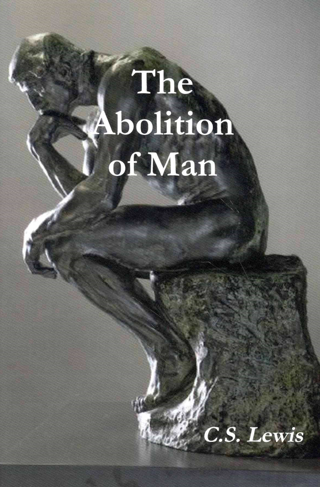 What this point is, and how he tries to make it in his own near- favourite book, will be the subject of our next Christian Classics Study Group session. It is readily available, new and used, alone or bound together with one or more of his other books, even as audiobook (sometimes found, I am not sure how legally, online!), or in Dutch translation as De afschaffing van de mens – though some of the new-book prices can seem steep for such a slim volume. Its Dutch translator, Arend Smilde, has useful notes to it on his website, Lewisiana.nl, as well as longer and shorter English and Dutch summaries, and a paper on a recent rereading of this near-favourite of his, too (and even fascinating evidence of how completely Ayn Rand misunderstood it!). I would encourage everyone, if at all possible, to borrow or buy a copy and read it, if you haven’t already, and reread it if you have – though not managing to do so will not keep you from taking part in an interesting discussion!

In it, Lewis states “that though I myself am a Theist, and indeed a Christian, I am not here attempting any indirect argument for Theism.” But, in its attention, like the collection of Broadcast Talks (1942) (later reprinted in Mere Christianity in 1952), to “Right and Wrong as a Clue to the Meaning of the Universe”, it can in fact serve as a praeparatio Evangelica – a preparation for the ‘good news’ of the Gospel. Lewis attends to the “belief that certain attitudes are really true, and others really false, to the kind of thing the universe is and the kind of things we are” found in diverse cultures throughout the world and down the millennia, under the name of one of its manifestations, ‘the Tao’ (providing a richly varied eight-page collections of “illustrations” of it as an appendix), and does so, as a teacher himself, with two decades of experience, very concretely in the context of education, traditional and contemporary.

And he considers the consequences of how we look at the universe and ourselves in it, in the context of “the progress of applied science” and the power exercised by some of us over others of us “with Nature as its instrument.” Can we prevent “the world of post-
humanity” which (“some knowingly and some unknowingly”) nearly all “are at present labouring to produce”? And, if so, how?

Interesting online resources related to The Abolition of Man include:

a lecture by the philosopher, John Lucas:
http://users.ox.ac.uk/~jrlucas/lewis.html

and a note by one political philosopher, Steven Hayward, of a recommendation by another, Leo Strauss:
http://www.powerlineblog.com/ archives/2016/10/c-s-lewis-on- politics.php

All are welcome to the supper (6:30pm) and discussion (8pm) on Friday the 26th of May. If you are coming to the supper please let Hannah Koolstra (office@holytrinityutrecht.nl) know so we know how many to provide for.

I hope to see you there!

David Llewellyn Dodds
Sometime President of the Oxford C.S. Lewis Society, and Curator of the old Lewis house, The Kilns;
Warden of the Arnhem-Nijmegen Chaplaincy 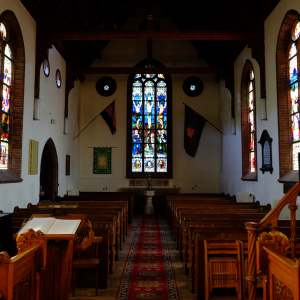