We have had a break from our Study Group over the summer, but will return on Friday, 20 November 18.30, to look at Aelred of Rievaulx’s great work called “Spiritual Friendship”. Aelred was the Abbot from 1147 to 1167 of the great English Cistercian Abbey of Rievaulx, near York in the North of England.

From the back cover of a translation comes this description:
“In a three-book Ciceronian dialogue Aelred defines human friendship as sacramental, beginning in creation, as God sought to place his own love of society in all his creatures, linking friends to Christ in this life and culminating in friendship with God in beatitude.”

Aelred, like all of the Early Church Fathers, considered what the Greek philosophers had to say on important subjects and then built on that knowledge and “baptized” it from the gift of divine revelation in Scripture.  See an excerpt from the beginning of this great work below.

An English translation of this work by Lawrence C Braceland is available through Amazon, and other translations are also available.

Hanna de Miranda has found the first book of the Braceland translation (the first of three books) online!
http://www.apocryphile.org/scu/articles/aelred.pdf

David Dod has found a work on Aelred of Rievaulx and his biographer:
https://archive.org/stream/ailredofrievaul00powi#page/n7/mode/2up

We begin with dinner at 6:30pm, discussion 8 to 9:30, concluding with fellowship.  All are most welcome.

Please let Hanna know if you’re coming so we can plan the dinner. 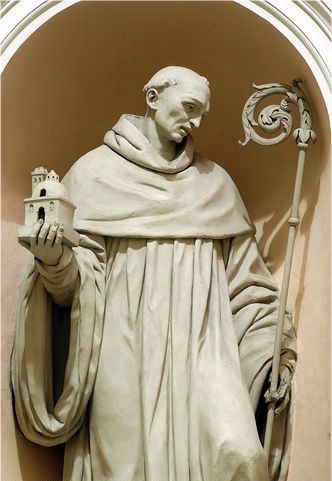 Here is an excerpt from the beginning of Aelred’s important work on Spiritual Friendship, written in the 12th century (translation by Lawrence C Braceland).  His book will be the subject of our Christian Classics Study Group on Friday November 20th (see article on page 11).  His work is written as a dialogue between himself and others following an ancient pattern.  This was a day in which many monks would be schooled first in the Greek and Roman classics, recognizing that truth, wherever it is found, should be valued, and also baptized if it comes from outside the Church.

Aelred.  Share with a friend all your thoughts and cares, that you may have something either to learn or to teach to give or to receive, to pour out and to drink in.

Ivo.  I am ready not to teach but to learn, not to give but to receive, not to pour out but to drink in, as my youth prescribes, my inexperience demands, and my monastic profession counsels.  But lest on these distinctions I should unwisely waste the time needed for other matters, would you teach me something about spiritual friendship?  What is it?  What values does it offer?  What is its beginning and its end?  Can friendship exist among all persons?  If not among all, then among whom?  How can it remain unbroken and so without any troubling disagreement reach a blessed end?

Aelred.  I wonder why you think I should be asked these questions.  Obviously all of them were treated more than adequately by the greatest teachers of old.  I wonder why especially, when you have spent your boyhood on studies of this kind and have read Tullius Cicero’s volume On Friendship, where in an engaging style he fully treated everything that seems to relate to friendship and gave a sort of outline of some of its laws and precepts.

Ivo.  His volume is not too unknown to me, since at one time I took the greatest delight in it.  But since the day that some drops of sweetness began to flow my way from the honeycombs of holy Scripture, and when the mellifluous name of Christ claimed my affection for itself, whatever I read or hear, however subtly argued, has neither the flavour nor light without the salt of heavenly letters and the seasoning of that most sweet name.

Therefore I would like such propositions as are in harmony with reason, or others whose usefulness your explanations reveals, to be proved to me by the authority of Scripture.  Similarly I want to be more fully taught about the right kind of friendship between us, which should begin in Christ, be maintained according to Christ, and have its end and value referred to Christ, who is the beginning and end of friendship.

Aelred.  I admit that you have convinced me up to this point, that as if not valuing my own ability on those questions, I will not so much teach you as confer with you.  You yourself have disclosed the way for both of us, when at the very entrance to our enquiry you lit that brightest of lamps, which prevents us from straying and leads us to the fixed end of the question proposed…