“As a supplement to our year long focus on Anglicanism: A Gift in Christ we are consider- ing important figures in the history of Anglicanism and especially those who are inspiration to us in their lives given to mission. The Rev Grant Crowe, Chaplain in Amersfoort, has prepared these reflections on Heroes of the Faith.”

“Ardently missionary with a strong focus upon scripture and personal piety, the Celtic movement had a major impact on the evangelization of the British Isles, Western Europe and Northern Europe in the fifth through tenth centuries.”1 Paul

Pierson says that two of the greatest Celtic Christian missionaries were Willibrord and Boniface. The Church of England, looking back to its historic roots, remembers Willibrord of York, as a bishop and an apostle to Frisia on 7th  November. His name also is that given to the Willibrord Society which seeks to build closer links between the Church of England and the Old Catholic churches2.

Willibrord was born, 658 AD, in the north of England, in Yorkshire. He was an Anglo- Saxon. As a child, he became a student of Wilfred at the monastic centre Wilfred had established in York. In 678 he went to Ireland partly for study, but also for voluntary exile, (a concept within Celtic Christianity, whereby you are willing to leave your homeland for the service of the Lord). He was to spend 12 years at the monastery of Rathmelsigi, in western Ireland, before returning to England in 690.

He then was sent out on mission – sent by Egbert – with 11 companions. Willibrord left in the era when the Christian Church in England, shaped by Irish enthusiasm, was for 400 years a great missionary church3.

Willibrord went, like many Celtic missionaries before him. Diarmaid MacCulloch says of the Celtic missionaries of that era: “They were conscious they had received Christianity by Mission and were determined to do the same for others.”4 There are few words by Willibrord but one note, in the margins of a calendar, recalls his missionary beginnings. “In the name of the Lord came Clement Willibrord, in the year, 690 after the Incarnation of Christ, across the sea into the land of the Franks.”5

The Franks originally had held areas which now are Southern Netherlands, Belgium and Northern France, and the Franks were Germanic tribes originally. But then the Merovingians joined with them as the Roman Empire collapsed, and they controlled most of Gaul which is modern day France. They remained the power in Western mainland Europe for centuries. The Frankish kings had converted to Christianity a century before

Willibrord’s ministry, and in those years after conversion, in 7th century, the Franks had established a church at Utrecht – 630 AD where the Dom kerk now lies.
Willibrord arrived and gained the support of Pippin II (Pepin of Herstal), who was the mayor of the palace of Clovis II, who was the king of the Franks.
Willibrord worked among the Frisians in the area conquered by the Franks. Frisia’s borders went from the north, down to Dorestad and Utrecht. He and his 11 companions began their work in Utrecht. 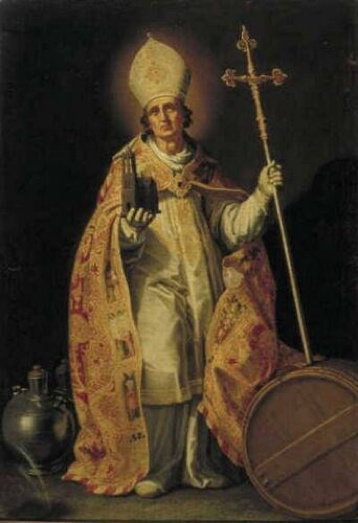 His work prospered. During his first three years there, he visited Rome, he was encouraged and received support from Pope Sergius. It has been noted that unlike many who went to Rome as pilgrims, he went as a missionary seeking blessing on his work. During his time in Rome, one of his original companions, Swithbert was made bishop. Swithbert left his work in Frisia and went to work in South Westphalia. Willibrord however continued to work among the Frisians.

Then in 695, it was felt that the mission work needed a bishop. Pepin wanted Willibrord to be made bishop and his companions agreed. He went again to Rome and this time he returned as a consecrated Bishop. He became the Archbishop of Utrecht. His mission, given by Pope Sergius : ‘to establish normal church organization with a metropolitan see at Utrecht and suffragan bishoprics similar to the pattern at Canterbury and elsewhere.’ It was also suggested he was made an archbishop to allow him to work independently of the bishops in the Frankish empire.

A cathedral was built, an old church of St Martin restored to worship. Other churches and monasteries were built6 and bishops consecrated. In 698 the largest monastery, Echernach, in what is now Luxembourg was built. Missionaries were sent out from Utrecht into Frisia. In the areas covered by the Frankish kings, Willibrord was fruitful in his episcopal ministry. Where he operated outside of their influence and control, the fruit was more sparse. In those areas, he needed the protection of secular rules and their patronage for his work. But in those regions, there was suspicion of the Christian faith, because the missionaries were forever linked to a ‘foreign’ kingdom, and so local lords would hold to their pagan worship and resist this foreign religion.

The border between the Frankish Empire and Frisia was never stable. An example is 714. Willibrord was driven out of Utrecht by Pagan King Radbod, churches were destroyed, priests were killed. The work of Willibrord seemly largely destroyed. But 5 years later, on Radbod’s death, Willibrord returned to the Western part of Frisia and was able for the first time also to witness in the eastern parts. Boniface joined him for 3 years – Boniface had tried missionary work in 716 but the militant paganism made work impossible. He returned, as did Willibrord when things were quieter.

Willibrord had hoped Boniface would replace him, but Boniface went to Germany where he was made Bishop in 722, and then 10 years later, made archbishop with the authority to consecrate bishops in Germany beyond the Rhine. He was also given the authority, to appoint Willibrord’s successor as Archbishop of Utrecht after Willibrord died.7

Willibrord’s work extended into Denmark. There he bought 30 slave boys and educated them as Christians. He went to Heligoland – the last place ironically of King Radbod who had pushed him out of Utrecht – where he baptised a number of inhabitants. He also killed some sacred cows which his followers needed for food. And he used a well, deemed sacred by the pagans, for baptisms. And at Walcheren, he destroyed a pagan idol8 an act which was a risk to his life. But in all these challenges to paganism, he remained unharmed.

A later writer described Willibrord as someone – energetic in preaching and in ministry, a man informed by prayer and by sacred writings, someone venerable, gracious, full of joy.9 Willibrord died at his monastery in Luxembourg in 739, aged 81.

How much he helped evangelise the Netherlands is unclear. Neil says: “Our sources give us little detail by which to judge of the methods in his work and nothing at all on which a statistical reckoning can be based.”10 Other writers would claim huge achievements by him: “Willibrord’s pioneering work which inaugurated a hundred years of England Christian influence on the Continent, was of great importance and he thoroughly deserves his title as patron of Holland.”11 Markus Wagner says that Willibrord and Boniface “significantly advanced the cause of Christianity in the Netherlands in the c8th.”12

When we consider the fruit, monasteries appear to be the centre of his work, for he founded two main monasteries at Utrecht and Echternacht. He left no writings – personal or theological – bar a few lines of words. This is in great contrast to Boniface who wrote much that we still have.

Willibrord did face persecution and the possibility of violence. But Neil says his main challenge was the inconstancy of the people and the regular tensions between Franks and Frisians.

Neil states: “For all the setbacks and failures in parts of the area, the work went forward, and by the time of the death of Willibrord, Frisia had a well established Church which was able to survive through all the later vicissitudes of political change.”13

To close. On my (Revd Grant) licensing in March last year, the Archbishop of the Old Catholic Church – Joris Vercammen – gave me a Seal of Willibrord –

The Church of England Collect for November 7th.

God, the Saviour of all,
you sent your bishop Willibrord from this land
to proclaim the good news to many peoples
and confirm them in their faith:
help us also to witness to your steadfast love
by word and deed
so that your Church may increase and grow strong in holiness;
through Jesus Christ your Son our Lord, who is alive and reigns with you,
in the unity of the Holy Spirit,
one God, now and for ever. Amen.