Home > Latest News > Chaplain's Letter > Letter from our Chaplain in…

Since we haven’t the resources to meet for worship more than twice monthly (2nd & 4th Sundays), but we very much still want to grow as a community, Grace Church launched a special 1st Sunday of the month activity in another local venue.

It’s called a GraceTALK, and it features an interesting guest speaker and a bring-and-share meal each time. Since the series began last September, we’ve had talks by Berdine van den Toren, on the work of the Church Mission Society (where she’s a consultant), Philip Monsbourgh, on the Nicene Creed (as he’d visited many ancient sites in Asia Minor relevant to the development of theology in the Early Church), and in March, the Revd Martin Mondal, a priest from the Church of Bangladesh, will speak on Christianity and inter-faith dialogue in South Asia.

The February 7th GraceTALK was also a special highlight for us. Evert Sulman, a native Groninger who had a vision to rally regional churches and the citizens of Groningen around the cause of welcoming all the asylum seekers who’ve escaped war zones to find themselves in the Northeast of the Netherlands, shared with us how his faith had motivated him to act on behalf of the poor and refugees. 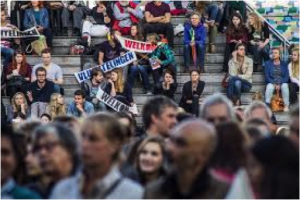 Evert’s initiative is called ‘Groningen verwelkomt vluchtelingen,’ and so far it has inspired thousands to make welcome packages for the newcomers and join in demonstrations for humane living conditions for them. Evert brought a Syrian choir from the local refugee center along on February 7th, and we enjoyed their music, and were also touched by their testimonies. (See photos.) All in all, an inspiring and fulfillin 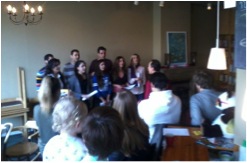 g day, with plenty of food for thought and prayer.

If you are in Groningen on a 1st Sunday of the month, come join us (GSp/SKLO building, Kraneweg 33).

Yours in Christ, Sam