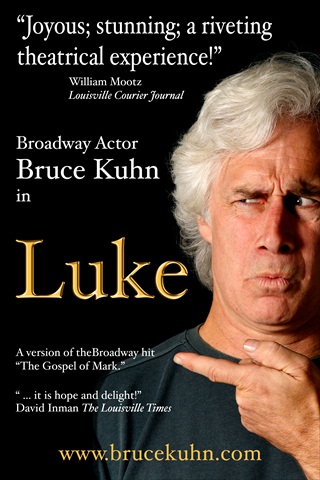 Broadway actor Bruce Kuhn is coming to Utrecht!
Bruce will perform the Gospel of Luke in the Anglican Church at the Van Limburg Stirumplein on Friday 8th of June.

His coming to Utrecht is an excellent opportunity for you to hear one of the most inspiring and influential stories of all time for the first time or again. We look forward to welcoming you at this occasion!

Bruce Kuhn performed on Broadway in the musical ‘Les Miserables’ and spent several seasons playing leads in American regional theaters. He now tours the globe with his solo performances of The Gospel of Luke, Acts, Het Evangelie van Marcus (in Dutch) and others, presenting the original eyewitness accounts from scripture —word for word—as if he saw them happen.

The doors will open at 7.30pm and the performance will start at 8pm.

“…an almost shocking informality characterizes the way he recounts most Jesus stories…a harsh, then joyful realism…a powerful immediacy. One audience member confided, ‘This is all new to me. I found it absolutely riveting.”

“…as a practicing Hindu…I came out inspired. Artistically and maybe even a little spiritually inspired as well. Kuhn’s Jesus is so calm and radiated such an aura of trust, it moved me a little, methinks. He breathed life into the characters but more importantly, he gave them attitude. Quite the cool dude, our Jesus, and quite the amazing actor, our Mr. Kuhn.”

“The words of the evangelist are given life and humanity by Bruce Kuhn. [He] portrays it with a relaxed skill that never turns coy or smirky. There’s a missionary fervor to Kuhn’s delivery that isn’t so much hellfire and damnation as it is hope and delight. He seems to discover the wonder and depth of each incident at the same instant we do.”

“…for the devoutly religious and atheist alike…Kuhn mixed the right degree of parody and exaggeration to amuse without betraying the far reaching message.”