Lord, as we consider written words of Scripture,
take us through spoken words, to the Living Word,
our Lord and Saviour.  Amen.

Our Second Sunday of Advent, Advent a time of purple when we prepare to celebrate the birth of the King of Kings and Lord of Lords in that manger, and also a time when we remind ourselves, we focus, remind ourselves upon the Lord’s promise that he will someday return. As the angels said when he ascended to heaven : This same Jesus who has been taken from you into heaven, will come back in the same way you have seen him go into heaven. [Acts 1]  It is as sure a return – even more sure – than Sinterklaas – by the way did you get your presents?  Good. 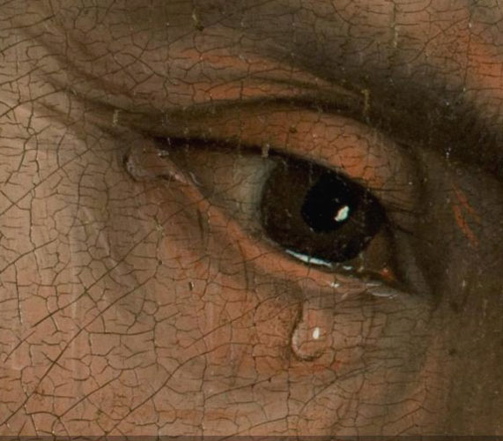 In Luke’s Gospel, in chapter 21, the Lord Jesus speaks not only about the destruction of the Temple and the city of Jerusalem, but also the events signalling his physical return to earth.  And so, it is Holy Week, Jesus has already entered the city in triumph on Palm Sunday but even on that day as he approached the city he wept, he cries, declaring if only the city had known the things of peace, the way of peace… but because they did not recognise the time of God’s coming to them, instead the city one day would be surrounded and the city would be destroyed… and he returns to these same prophetic statements in today’s reading. His followers point to the magnificent temple – a temple which loomed like a snow covered mountain over the city with its many stones of 12 to 60 feet in length.  And Jesus says, this will be destroyed not one stone left.

They ask when and what will be the signs.  And Jesus first warns his followers – not to be drawn away from him and not to be worried by events around them.  He says be careful not to be taken away from the true faith and he says in all the wars and revolutions, and even when nations will rise against nation and there will be famines and plagues – God remains in control… in what seems the worst of times, God remains in control…

But then Jesus turns and says – But before all these things I have just said, there are things coming much sooner.  And he begins to share about persecution. They will be arrested, all because they are Christians – because they bear the Lord’s name – but these imprisonments will not mean a failure of God’s plan or a frustration – instead Jesus says: you will be my witnesses to them. And what is more, they are not to worry about what to say but that they will be given the words and wisdom to say.  And we see that wonderful phrase – I will give you words and wisdom that none of our adversaries will be able to resist or contradict. We think of the wisdom of Christ he shows in his dealings with people and he says he will help them to be wise.  Wonderful – not that they will have learned it from books or be clever enough but the Lord will give.  Through his Spirit – the promise at the end of Matthew, the promise in John, the promise we say in Communion – the Lord is here, his Spirit is with us. The Lord will be there in the hard times as well as the joyful and peaceful ones.

And it will be hard times – parents, relatives, friends, brothers, will betray them.  Such awful description, in a culture where kin was so important.  Yet these words are spoken during Holy Week, still to come is Maundy Thursday when our Lord will be betrayed by someone close to him.  Yet in those times, we know, as Paul writes in Romans, that those believers are not cut off from the love of Christ for who shall separate us from the love of Christ, shall trouble or hardship or persecution or famine or nakedness or danger or sword…  Nothing in all creation is able to separate us from the love of God that is in Christ Jesus our Lord. [8:35,38]

And can I say, that remains true for us today – Christ is with us in our difficulties and he can direct and guide us and we are never cut off from his love. In fact, our eternal connection to the Lord is shown by the final words in that paragraph – some of you will be put to death. You will be hated by all for my name’s sake. But not a hair of your head will perish. By your endurance you will gain your lives.  Now some will be killed yet not a hair of their head will perish.  Saying that even if they die physically, they will suffer no eternal spiritual harm.  It reminds us of John 10: a beautiful promise: a verse written in my bible by my friend Jessie after I became a Christian at university: My sheep hear my voice and I know them and they follow me and I give them eternal life and they will never perish and no one can snatch them out of my hand. My father, who has given them to me is greater than all, and no one is able to snatch them out of the Father’s hand. I and the Father are one.  Jesus promises – if you endure, remain faithful to Christ, then even if they die for the faith, they are not or will not be plucked from the Father’s hand.

An area close to my heart is the persecuted Christian church – what the Lord said in those temple courts, still goes on today…  On Tuesday last week there was a Gathering at European Parliament in Brussels which focused on tackling the persecution of Christians.  Members of that Parliament attended and heard how research showed that 200 churches or Christian places of worship are attacked every day across the world.  The European Parliament Vice-President Antonio Tajani, who led the conference, said: “Persecution is happening outside the EU but we can’t afford to ignore it.  Every day, in every region of our planet, we register new cases of systematic violence and persecution against Christians.  No other religious community is faced with such hatred, violence and aggression as is the Christian community.”  There are many today who hold dearly to that promise that no matter what happens to them physically if they endure, they will in fact gain their lives, not lose them.

Then Jesus prophesies the destruction of the temple and city.  The third time he has done so in the gospel.  The city is destroyed not in vengeance by the Roman armies under Titus, as happened in AD70, but it will be God punishing the city.  The leaders who did not turn to God or acknowledge or honour the Messiah and Son, the crowds who were merely interested in Jesus than believed in him.  A city summarised by a temple which needed cleansing by Christ.  Judgement will come Jesus promises.  People were warned to flee when they saw the city surrounded and the Christians acted on Jesus words as the Roman armies approached the Christians left the city.  Fled to Pella over the Jordan.  They stayed away until the city was destroyed and the Romans allowed them to return.  Yet it was a terrible time, a five month siege and 10000 died.

Jesus says: That Jerusalem will be trampled underfoot until the times of the Gentiles are fulfilled… and when will those times come to an end? This destruction was not the final sign that the Lord would return but a key sign that as that event happened – so would the Lord return…

The final signs leading to our Lord’s visual, physical return, his second advent, are to be cosmic and so we know they are still in our future.  Nature being shaken, nations in fear and distress, the heavens being shaken.… Yet as the believers see such chaos they are not to be in fear, but instead to lift up their heads for they will know that their salvation, their redemption is near.  We look forward to our redemption when the Lord returns.  Redemption is being freed from slavery – our liberation – liberation from mortal bodies as our bodies become immortal, as the sinful nature is removed, as addictions and illnesses are healed, as the dead will be raised…  The world will see the advent of One like the son of Man – a quotation from Daniel 7 – where an individual is brought into God’s presence who is given authority, glory, sovereign power and all rulers, all peoples of every language will worship.  He will have a kingdom that will not wear away or decay but will be eternal, it will not be destroyed it will be everlasting.  Jesus takes that title for himself, he is the one like the son of man, with whom the kingdom of God will come.  Jesus encourages the believers, as they see the signs like you see the signs of spring on trees – they will know the Lords return is very near.  They will not know the exact day but they know it is very close.

And then he says: This generation will not pass away until all has taken place.  Who is this generation? When Jesus spoke these words, it was 30 or more years before Luke wrote them in his gospel.  Many of those who heard the words had since died.  And we know the temple was destroyed in AD70, even years later.  Some bibles say that the Greek word can be used for race suggesting that the Jewish people will always exist, perservere.  They will always exist I believe but I don’t believe that is the meaning.  Thinking of the context, I feel it means this generation means “the generation” who see these final cosmic signs, when those awful occurrences begin that generation will not pass away before the Lord returns in glory.  Jesus means not the generation who heard him speak those words, but rather the generation who will see those final signs, in their days the Lord will return.

And how sure is this return?  Heaven and earth will pass away but my words will not pass away.  Creation may pass away, the Lord seems to say, but his words are more sure.  Even if Dutch autumn weather surely means rain, windy and cold as my wife put it – the Lord’s return is more sure.  His return is even more sure than Sinterklaas and Zwarte Piet coming each year…

In this confidence, how are we to live?  Jesus began by warning us that we are not to be drawn away from him by wrong teaching, that we are not to be terrified by world events, and he finishes chapter 21 by watching we are not drawn away by our inner temptations , but we are to be watchful – the Lord could be at the door, he could come in at any time, and we are to be praying people, praying we will remain faith through our lives no matter what comes.  We long to be faithful, steadfast, ready to meet the Lord when he comes.

And we have a God as Paul reminds us – a God of encouragement and endurance, who invites us to endure, who encourages us through the word of God, and who wants to fill us with all joy and peace in believing so that through his Holy Spirit we can abound in rock solid hope that our faith in the Lord is true and real and someday he will return…

Almighty God,
purify our hearts and minds,
that when your Son Jesus Christ comes again as judge and saviour
we may be ready to receive him,
who is our Lord and our God.  Amen.