O God, our Good Shepherd, you who lead us as a flock.
We invite you through spoken words, restore our souls
and lead us in paths for your name’s sake.
Let your face shine upon us in this place.  Amen.

Reactions and responses.  Last night at the Christmas party, some of us heard a lovely piece of piano music by Chopin followed by a variation of a Bulgarian folk song, by Kristian. There was warm applause and appreciation. This coming week, the event of events is happening, the latest in the Star Wars films, the Force Awakens, opens… after ambivalence about the previous three, how will people react and respond to what they see. I am a Manchester United fan, have been since I was a boy, and our current manager, Louis van Gaal, his approach and current results has led to mixed responses from the fans. Not only are the results not good, but the way the team is playing is not meeting people’s expectations and so there has been quite a lot of unrest.

Reactions and responses are the focus of Matthew’s Gospel chapters 11-13.  Our Gospel began with John the Baptist, in Herod’s prison, hearing of the deeds of the Christ. This chapter and the next one, reveals some responses, which include misunderstanding but also opposition. Chapter 13 is a parable of the kingdom explaining these responses and declaring in all this misunderstanding and opposition, the kingdom is advancing.

John the Baptist – the third Sunday of Advent focuses on him – is imprisoned, and he sends his disciples to Jesus, to ask “Are you the one who is to come or shall we look for another.” John’s reaction to  what he has heard. Jesus response: Jesus then tells the disciples – look at the miracles he has done and the teaching and preaching – and there is the answer.

In one way Jesus response is a patient one. And interestingly he does not say – Yes I am the one.  I mean if a police officer stops your car and asks who are you – you probably aren’t going to say, well the things I have done say who I am…Jesus points to passages in Isaiah, particularly but not only in Isaiah 35 – our OT reading.

Jesus words are a summary of his ministry to date and a summary of chapters 8 and 9 of Matthew as well. But as I read the slowly I will share the reference in Isaiah…

The blind will receive their sight – Isaiah 35: Isaiah says the blessings that God’s people will receive – the eyes of the blind shall be opened…

Jesus says: the lame walk – Isaiah 35– shall the lame man lead like a deer/

Jesus says: lepers are cleansed – Isaiah 53 surely he bore our griefs and carried our sorrows…

Jesus says – the deaf hear… Isaiah 35 “the ears of the deaf unstopped.”

The dead are raised up – Isaiah 26, “your dead shall live, their bodies shall rise.”

And finally, the poor have good news preached to them… Isaiah 61, “The Spirit of the Lord God is upon me because the LORD has anointed me to bring good news to the poor…”

The Lord Jesus not only list the miracles, but he is saying that each deed of his has been pointed to in the prophets, and his miracles are sufficient proof that the promised time of salvation had come – the Lord God had come, the year of the Lord’s favour had come…What the prophets had testified has been fulfilled in the kingdom of God that Jesus has brought.

The Old Testament reveals Christ to us, and not just the New Testament…

Jesus finishes his words with “And blessed is the one who is not offended by me.” Jesus appears to be saying, the key is to be open to God’s unfolding plan even though Jesus ministry did not exactly match their Messianic expectations. It is important that our faith is not knocked by the Lord not working in ways we did not expect or do not believe he would. 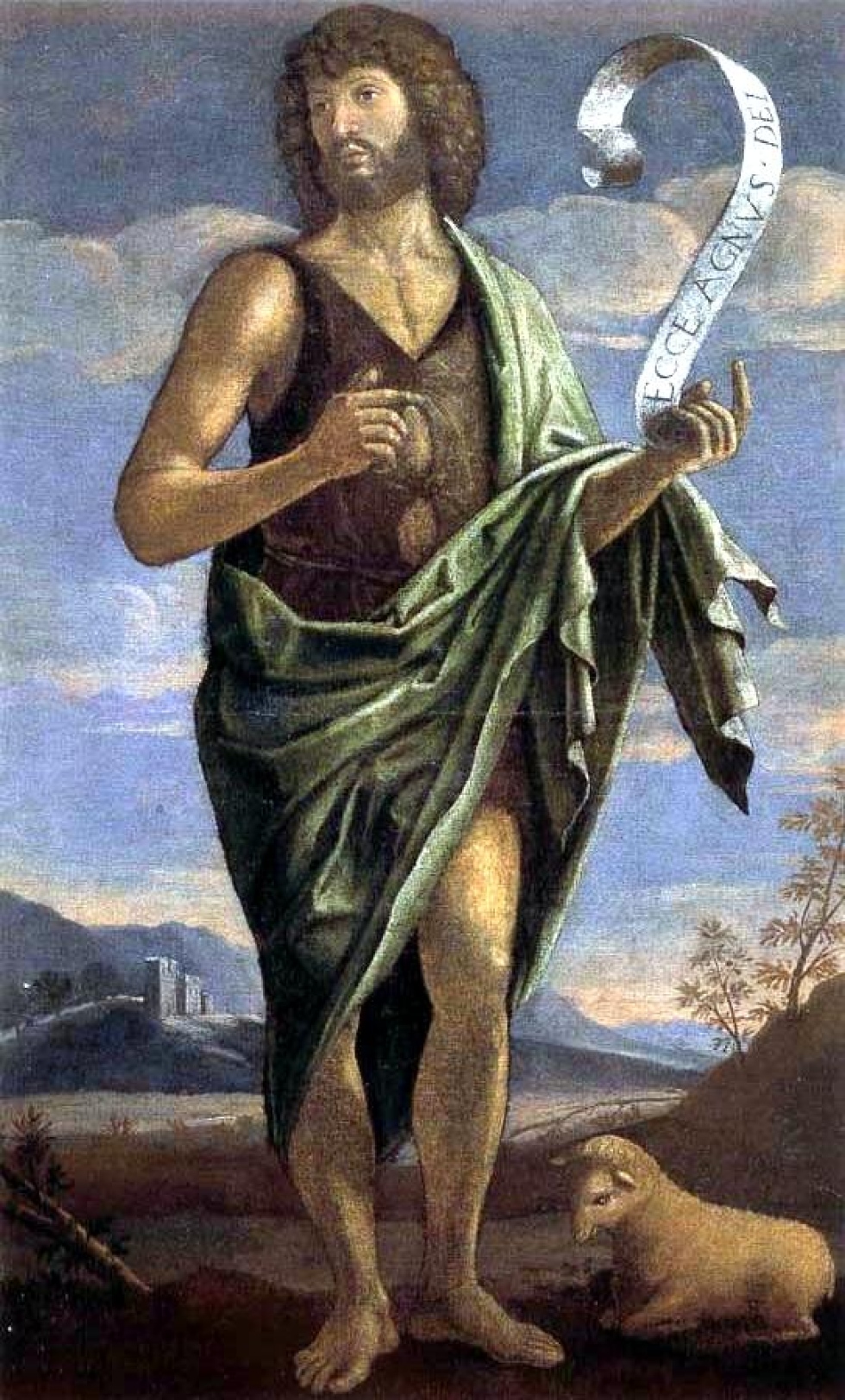 John the Baptist had began with a clear focus on who Christ was. At his baptism, he said to Jesus “I need to be baptized by you and do you come to me?” He recognised who Jesus was, the promised Messiah, the Christ. And he points his disciples to Jesus – behold the Lamb of God who takes away the sin of the world…and then in John 3, when he is told people are turning to follow Jesus instead of him, he said “you yourselves heard me bear witness that I said: “I am not the Christ, but I have been sent before him. The one who has the bride is the bridegroom. The friend of the bridegroom who stands and hears him, rejoices greatly at the bridegrooms voice. Therefore this joy of mine is now complete. He must increase but I must decrease.”

Can you see the focus, the faith, the surety – Jesus is the Christ? John is clear and sure…

Yet in prison, a year of imprisonment, not knowing if he will be executed or released by Herod, did doubts arise? John, like many faithful Jews, would have expected the Messiah when he came to bring blessing on those who repented, and judgement on the unrepentant. In Jesus’ ministry, blessings had come, judgement had not. Not even on judgement had come to a King who clearly committed immortality and sin and imprisoned a prophet of the Lord Almighty. Things had not worked out the way John expected. You could say, the Lord Jesus was not acting in a way he expected…And perhaps that led to the doubts – “are you the one who is to come, or shall we look for another?”

Do doubts come when God does not act in a way we expect?

Doubts when things do not go in the way we expected? Doubts does God love me? Is God for me?

When I was a curate, I spent about a year, helping to establish a proposed intern program, called Ignite, which was meant to enable people for a year to work in a number of churches to explore what God was calling them to do. We had the churches in place, the accommodation in place, a great ad, and off we went. We had interest. But only one applied and she was not suitable. And then we lost the accommodation option and it all fell apart. I remember saying to God, I felt I’d wasted a year of work. I was unhappy and told him. And you know, I felt the Spirit nudged me, it came into mind Stephen – and the question – was it a waste – a young believer in his prime and then stoned to death in Acts 6. I said it was. Yet it came into mind, that with God nothing is ever wasted. And I remembered how Paul – known as Saul – was at his death. Did that death witness to Saul help prepare him for when he met the Lord Jesus on that road to Damascus? And that helped me – with the Lord nothing is ever wasted.

Jesus takes John back to the scriptures he would have known, to see again how Jesus was in line with the prophetic promises. So one challenge – is my or our view of the Lord, his character, how he acts or doesn’t act, is it in line with the Scripture? In 2 Tim 3, Paul says all Scripture if God breathed and useful for correcting, rebuking, teaching and training in righteousness. Correcting, rebuking, teaching… suggesting we may have ideas, but need correction. So do we as a result, have a regular pattern of reading the scripture. If we do not, on the noticesheet there are suggested passages per week…

A second challenge – John bring his doubts to Christ. After all his pronouncements and acts –he sends a message with the disciples – are you the one? John admits he has doubts. He admits it to the Lord and he admits it, in the hearing of others, his own followers. Maybe we would call ourselves a new Christian and we have doubts, questions… John’s example is to bring them to the Lord in prayer…don’t bottle them up, bring them to the Lord in prayer. Yet also, we see John – he’s been a faithful follower for years, he is in prison keeping the faith, yet this doubt has come to him. So, we may have been a faithful Christian for years, but if you have something that is eating away your faith – something has happened at work, in your family, perhaps it is events on the news or it is your health. Bring to the Lord in prayer… Jesus does not rebuke John for bringing him this question.

In fact, as we read the rest of the verses, Jesus then bears witness to John. Jesus tells the crowd – that John was not weak or bending under every pressure like a reed – he was strong – he wasn’t someone in luxury and ease, he was tough. And he was a prophet – in fact he was more than a prophet – he was the one who had a prophecy about himself – Behold I send my messenger before your face who will prepare your way before you. John was the prophet – in fact – more than a prophet, greatest ever, for he was the one who prepared the way before the Lord.

This incredible witness, yes affirms to the crowd who John was, but consider, why do this, if you feel John has failed by asking the question he did. I do not see a Lord rejecting John for the request. He is building John up. And that attitude of Jesus is summarised beautifully at the end of the chapter, in well known words used in the Prayer Book: “Come to me, all who labour and are heavy laden and I will give you rest, Take my yoke upon you and learn from me, for I am gentle and lowly in heart, and you fill find rest of your souls. For my yoke is easy, and my burden is light.” [Matthew 11:28]

What are our responses to the Lord, to what he is doing? What reactions do we have? The Lord who says service he calls us to – to do with him – is not to be a burden, but when the doubts come, he remains gentle and lowly in heart and let us turn to him in prayer.

Lord, when we have trials and temptations, remind us, help us to take these things Lord to you in prayer. When we are in trouble or discouraged, may take to you in prayer. Remind us Lord that you are a faithful friend with whom all our sorrows we can share. You know our every weakness, let us take each of them to you in prayer. Amen.