Let the thoughts of my mind and the mediations of all our hearts always be acceptable in thy sight,
O Lord, our Strength and our Redeemer. Amen.

After this sermon we will confess with the words of the Nicene Creed that we believe in God the creator of heaven and earth, of all things visible and invisible. It is easy for us to recognise God in the visible creation, we are every day reminded of all visible things God created, including ourselves. The invisible part of the creation might be more difficult for us to recognise, even though we confess our belief in it. I suppose this difficulty is one of the reasons why the feast of St. Michael and all angels is on the liturgical calendar. To remind us of the existence and presence of these wonderful and strange beings: angels. 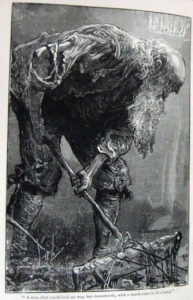 When preparing this sermon I was reminded of a picture I saw in my childhood of John Bunyan’s Pilgrim’s Progress. The picture featured a man, working on his land, looking down. Because he was looking down he was not able to see the celestial crown that was offered to him by an angel. We often behave like this man. In one way this is good, we are called to care about the earth and the visible creation and to enjoy all that is good on this earth. But by doing this, we might be a bit too busy to take note of the invisible world and the role invisible creatures play in our life and our world. So this man, and also we, should look up.

Someone told me this week a story about a woman who one day drove on the highway and suddenly saw a white light and thought she must be seeing an angel. Two weeks later she realised it was the flash of a camera when she received the fine for driving too fast. These kind of stories are an easy way to make us cynical about the presence of angels in the world, maybe especially in our culture in which we have a strong focus on things we can see and understand. We tend to think that what we can’t see, can’t exist. We are trained to look down to the earth, and set the boundaries of our world as far as the laws of physics go. This attitude influences Christianity as well and maybe you recognise this: maybe it’s not to the same extent, but you might recognise the way of thinking. In my youth Lord of the Rings had a kind of an occult connotation, not because of the story, but because there were all kinds of strange beings in these stories, like elves, dwarves, orcs and even wizards! I mean: it’s ridiculous that beings like that could really exist, right? And angels: (of course they are in heaven and we believe in them, but walking around here? Seriously? I personally find it very hard to imagine this.

Most of us have not seen angels. This woman in her car who thought she must be seeing an angel was wary that at any time an angel might be appearing to her. It is a good mind-set to be aware when something unexpected happens to realise this might be an angel. Maybe we’re too often attributing things to coincidence, maybe even unconsciously, while it’s actually God trying to say something to us, or appearing to us through an angel. St. Paul writes that we should be hospitable to strangers because ‘by so doing some people have shown hospitality to angels without knowing it.’ (Hebrews 13:2) This also shows that angels can appear to us in human form. 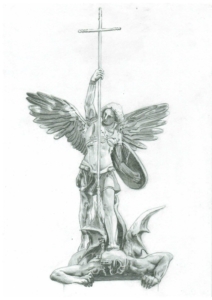 But what are these angels exactly?

First it’s important to note that angels are numerous times involved in stories in the Bible. The word angel is derived from the Greek word for messenger and they are the loyal serving spirits of God as opposed to the devil and his angels who do not want to obey God. In the Bible they often appear when bringing a message, protecting someone or liberating him from prison (in the case of Peter), and sometimes they are engaged in fighting wars against the devil and his angels.

Our tendency to have less attention for angels is, however understandable, strange if we look at the gospels. In the gospels angels play an important role. At almost all the crucial moments in the life of Jesus angels are involved. Gabriel announces the incarnation to Mary, angels appear to the shepherds after the birth of Jesus, they serve Jesus after he withstood the devil in the desert, they are the first witnesses of the resurrection and an angel is with the disciples right after the ascension of Jesus. We can also be assured that the appearance of angels does not end in the gospels. The Bible is clear that angels will accompany Jesus when he returns (Matthew 16:27) and even announce his second coming with a trumpet call. (1 Thessalonians 4:16)

This significant part they play in the gospels has to do with the fact that angels are one of the ways God manifests himself on earth. This is what they do. When they bring a message from God, they tell us Gods will. When they fight against the devil, they do God’s will. (Daniel 10:13) Or when they glorify God, they’re glorifying God and not themselves. This glorifying is showed by the vision of Isaiah, who sees God sitting on his throne and the seraphim standing above him saying ‘Holy, Holy, Holy is the Lord of hosts; the whole earth is full of his glory’.(Isaiah 6:1-3) An act that we mirror in this service when we sing the Sanctus and Benedictus during the Eucharistic prayer.

Because they are always serving and reflecting God, it is difficult to grasp what angels are and do. And this is why there presence is often taken for granted. They are loyal servants manifesting God in the world. This makes it hard to distinguish their own identity. Their identity is for a large part dependent on God, who sends them. As messengers they do not try to draw all attention to themselves. Even when the angel chorus sings the ‘Glory to God in the highest’ for the shepherds, the very text they sing makes clear that it is not about them, but about God. By this song they’re telling the shepherds: ‘Don’t look at us, praise God and go look for the child in Bethlehem.’

Nevertheless angels do have a separate identity. This is partly clear because we know a number of them fell. If they were only reflecting God’s image this would be impossible. You can only choose against God when God has given you your own identity. We know some of them by names, like Michael and Gabriel, (and Raphael and Uriel from the Apocrypha). Names are of course a clear indication of a separate identity. Dionysus the Areopagite and Gregory the Great distinguish nine different levels of angels found in the Bible, so there is a hierarchy. This also shows that angels are not all the same, but different and have their own identity. In the opening hymn we sung today, following Dionysius, they rank from highest to lowest: ‘Seraphim, cherubim, thrones… dominions, principalities, powers…  virtues, archangels and angels. The cherubim and seraphim are continually praising God face to face, some rule in an intermediate way between earth and heaven, and the archangels and angels are the ones ministering to individuals on earth. Tolkien, a devote Christian, in writing about the imaginary world of Lord of the Rings, gives analogies to help us picture the relation between God and the angels. In the opening chapters of the Silmarillion, Eru, ‘The One’, ‘Illuvator’, creates the earth by singing a song and all the spirits around him play a role in this song. He shared parts of his identity with all of these spirits, but most of his identity with Melkor. This Melkor, who was most alike ‘The One’, wanted to sing his own song and so brought evil into the world. In the Silmarillion all these spirits have a different role and there is a range of how much ‘The One’ shared with them. Stories like this, but also movies like ‘It’s a Wonderful Life’ and ‘Wings of Desire’ can help us understand a bit more about this wonderful spiritual world.

So what to do about these angels in our daily life? I find it hard to see angels in my daily life, and you might be encountering the same problem. Nonetheless we can be sure they’re on earth, as St. Paul writes ‘Are not the angels ministering spirits, sent to serve those who will inherit salvation?’ Maybe some of you have had experiences in your life that you cannot explain or understand. If it was anything that felt like a divine intervention, this might very well have been an angel. We should realise the presence of angels more and instead of attributing everything right away to coincidence wonder if what occurred was maybe their doing. Another thing we could do is pray to God when we’re in trouble and ask him to send us an angel.

Finally, there is this beautiful story of Elisha that I was reminded of this morning in the daily readings. Elisha is surrounded by the Syrian army and his servant says upset: “Alas, my master! What shall we do?” Elisha at the same time is not worried at all, because he is able to see the enormous army of angels around them. So Elisha prays to God to open his servant’s eyes, God answers this prayer and then his servant sees this vast army. Nothing changed. Apart from the fact that this servant can now see this army of angels. So the only thing that changes is the servant’s ability to see. Likewise we should pray God to open our eyes to be more aware of the invisible world around us, to be more aware of his hand and his angels in the world. It is few people given to see angels with their physical eyes in their lifetime. But there are more angels than we can count and they’re doing more things than we can ever imagine. By being more aware of this invisible spiritual world, we can see more of these angels and by doing so also see more of The One who is surrounded by angels and sends down his angels to help and serve us.