Home > Sermons > Be strong and of good courage!

Be strong and of good courage; be not frightened nor dismayed;
for the Lord your God is with you wherever you go.

We are continuing a thematic approach to these evenings, focusing on the virtues of the soul.  Tonight we are considering “Courage” or “Fortitude”.

A virtue is a quality that adorns the soul through the practice of a good habit.

Courage is one the four cardinal virtues (wisdom, courage, temperance, justice), so called because they are foundational – they were identified by the Greeks through philosophical reflection and they are all found throughout the Bible.  Courage is another word for fortitude or strength or bravery.  How does courage relate to us? 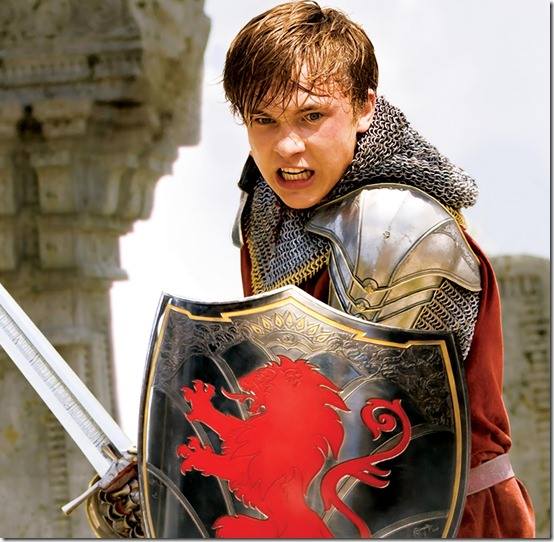 Courage is the virtue which adorns the irascible aspect of our souls – that fight or flight impulse in us when danger is upon us or when we see a good that is not easy to obtain.  That impulse is given to us by God naturally to avoid pain and to preserve ourselves.  When fear arises in us because of some perceived danger, we react to it.  But because of the confusion of our souls, we do not always react well.  We might cower and withdraw when we should fight or draw near, we might fight when we really should withdraw.

Courage is that virtue enabling us to act despite our fear and to do the right thing, to be ready even to fall in the battle.  Courage does not make us suffer pointlessly, but for a great good we perceive through hope to be attainable.

We all know courage, we have exercised it –

Paula noted that the Bible is full of passages of God telling us to have courage – she quoted one from Deuteronomy that appears several times in the Bible – it is much like this quote we heard tonight from Joshua:

Be strong and of good courage; be not frightened nor dismayed;
for the Lord your God is with you wherever you go.

Joshua had recently taken over the leadership of Israel when Moses died – he hesitates before going across the Jordan and into the promised Land, he is afraid on different levels – we know he was afraid because God does not speak without purpose, and tells him to have courage not once but three times!  Joshua probably wondered can I be a leader? what sort of dangers will we face? so many uncertainties? he is afraid.  I remember before going up to minister in my first parish in a Native Community in Northern Quebec.  I called my mentor, I wasn’t very clear about why I was anxious and without saying anything he could sense I needed courage and told me to read later this passage we read tonight – and when I did, I felt immediately physically and spiritually strengthened.  There was a recovery of joy, the release of energy and excitement about the coming adventure – yes, of course! God will be with me, all things are possible with Him!

We keep these stories in the Bible before our minds, and we are encouraged. But our courage needs to be tested.

Paula has noted that we need courage in the face of physical pain, hardship, death, or threat of death.

Our courage may never be tested in such a profound way in this life, but there are all sorts of ways we need courage to live a moral life.

In all these ways, as we practice our faith, publically and in our decision making and following through, courage grows – it is easier to speak out against evil the next time, easier to walk in the way of love, easier to resist temptation, easier to step out in faith – courage becomes a habit in our soul.

Joseph Pieper speaks of another level of courage or fortitude, beyond the courage needed to live faithfully in the world, it is the inward courage in our spiritual journey to the heart of God.

It takes courage to seek out God – we may fear leaving others around us behind – even family and friends to walk closer with Jesus.  We may fear condemnation from God Himself for our actions or inner thoughts when we draw near to the One who is All Knowing and All Powerful.  We may fear losing what must die within us – unrighteous desires or habits.  Courage is needed to continue on the path to God – to experience and go through what is described by the mystics as the dark night of the soul, “in which the soul must think itself abandoned and lost like a man drowning on the open sea… for the sake of love’s perfection he walks straight up to dreadfulness; he is not afraid to lose his life for the Lord’s sake.” (Pieper, pp.136, 137).

In encounters in the Bible between humanity and the divine (either through the appearance of an angel or when Jesus revealed divine power), the immediate response of people was often terror.  People were immobilized by fear, they fell on their faces, they withdrew, and the first response from God’s side was always, Fear not!  These words strengthen, give courage.  Sometimes an angel touched the person to enable them to sustain the heavenly vision. (e.g. Daniel 8:18; 10:8f, St John in Rev 1:17)

Perhaps you can see how holding before our minds the Passion and death of Jesus on the Cross, as we do especially in the final weeks of Lent, can actually strengthen us, give us courage, in our journey to God.  We don’t fear condemnation by God when we see the mercy that flows from the Cross – we draw near despite our unworthiness.  We are assured that God did not come into the world to condemn us but that we might be saved.

And if we are suffering for doing what is right – we remember Jesus’ words, “If they hated you, remember that they hated me first.” (John 15:18)  Our suffering can be borne more easily in the certainty that God knows what we are going through and that it is worth it (e.g. in watching “The Passion” there is a beautiful scene where Jesus is struggling to bear the cross, bloodied, he looks up and sees his mother and says, “Mother, behold, I make all things new.”  We suffer for being faithful, and if we continue to move forward in love against opposition, the world is changed.  Our sufferings borne in faith are redemptive.).

Paula reminded the students of how St Paul encourages us to be strong in that famous passage about putting on the whole armour of God in Ephesians 6:10f – reminding us of the shield of faith, the helmet salvation (that is, our hope in eternal life), of the power of truth, and of a righteous life – these things all give us confidence, make us brave, encourage us to be bold.

But this image of being covered in armour is not meant to suggest we will not be hurt – St Paul is writing that from prison!  He describes himself as an ambassador in chains!  His life ended in Rome with being beheaded with a sword.

Joseph Pieper says that Courage or “Fortitude presupposes vulnerability… Because man is by nature vulnerable he can be brave… and every courageous action has as its deepest root the readiness to die….”

Jesus tells us, “Whoever would save his life, will lose it, and whoever loses his life for my sake, will find it.” (Matt 16:25)  I think when we hear that, it is both scary and exciting at the same time.  Losing one’s life is not just about physical martyrdom but about a loosening of the tight grip of our hold over the circumstances of our lives so that God can work in us, it is about stepping out courageously in faith.

The virtue of courage is not given to Christians so that we can avoid being harmed, it is not given to us to preserve our lives at all cost, but it is to enable us to be vulnerable in acts of love, to pour out our lives as a living sacrifice, to be steadfast in the face of persecution, to be able to walk in the way of love as Christ loved us and gave himself up for us, a fragrant offering and sacrifice to God. (Ephesians 5:2)