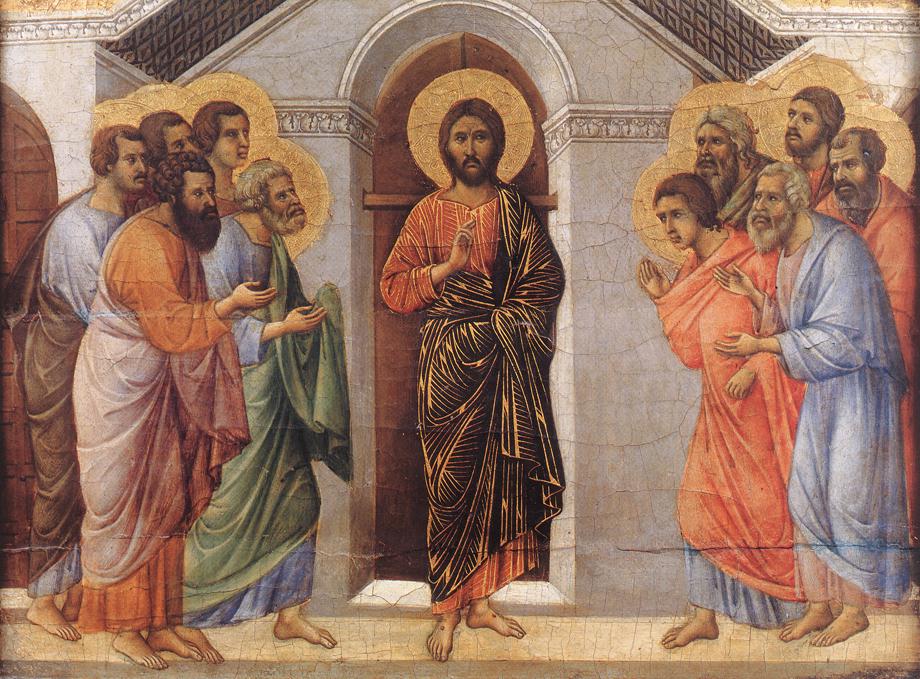 Jesus came and stood in the midst, and said to them, “Peace be with you. ”
And when he had said this, he showed them his hands and his side.

On the third day after Jesus’ crucifixion, the disciples were greatly distressed in soul, and they had many reasons not to be at peace.

The Gospel says that they were locked in a room, afraid of the Jewish authorities – if Jesus had been arrested and condemned to such a horrible death, surely they were next on the list. They lived in a very violent world. There were soldiers and informants everywhere in the streets.

There were other reasons they were greatly distressed in soul. For one thing, they had given up all to follow Jesus and had trusted that he was the Messiah, only to see all their hopes of the establishing of the new Kingdom apparently utterly shattered.

And each one of them had their own personal reasons to feel distress and shame at their recent actions – all of the disciples, who had spoken so bravely in Jesus’ presence, fled when he was arrested. Peter had later denied that he even knew Jesus, not once, but three times – and Peter knew that Jesus knew it.

But their greatest distress was their deep grief at the death of their dearest friend, their teacher, and their Lord… can there be any greater remover of peace, than the death of a beloved?

But in an instant all of that anxiety and distress in their souls would change.

Then Jesus came and stood in the midst [of the disciples], and said to them, Peace be with you. And he showed them his hands and his side. Then the disciples were glad, when they saw the Lord.

Their biggest distress – the death of a loved one, and death itself, as such an offense to every human being – is overcome in a moment – it is really him, the same one that was nailed to the Cross.

Jesus’ resurrection is the only thing that can in time restore peace to our souls in the face of our own death and in the face of the death of a loved one.

But if we are going to live beyond this life, can we face our Maker, can we ever have peace with what we have done in the past?

And he showed them his hands and his side. Then the disciples were glad.

When Jesus showed them the marks in his hands and his side – he was not just identifying himself as that same man who died on the Cross. But he pointed to these marks as the marks of the profound love of God for us. Here are the wounds of Christ’s self-offering for us, and when he pointed to them in his body he was showing them and us that his sacrifice has been accepted. Here are the precious wounds that open for you and I the floodgates of God’s mercy and forgiveness.

In out Epistle today, the Apostle John witnessed that, on the Cross, from Jesus’ side flowed blood and water.  As Eve, the mother of all humanity, was formed from the rib taken out of a wound made by God in the side of Adam – so now the Church, the new humanity, is created through the wound in Christ’s side opened up by the soldier’s spear.  It was a wound out of which flowed water and blood – signs pointing to the sacraments of Baptism and Communion, through which we are washed and forgiven and through which we are sustained in the new life of grace. [interpretation of the Fathers]

And he showed them his hands and his side. Then the disciples were glad.

We have peace about the death of loved ones…in time (maybe only ultimate peace when we meet them again in the life to come), and peace because of the forgiveness of our sins and so peace as we approach our own deaths.

What else remains for us to have peace in this world?

Is it not peace with others?

Then said Jesus to them again, Peace be to you: As my Father has sent me, even so send I you.

Why did the Father send the Son into the world? it was not to condemn us, but to save us, through his life, death, and resurrection.

Peace be to you: As my Father has sent me, even so I am sending you. And when he had said this, he breathed on them, and said to them, Receive the Holy Spirit. If you forgive the sins of any, they are forgiven them; if you withhold forgiveness from any, it is withheld.

These are the first words Jesus chooses to say when he returns to the Apostles – they are of foremost importance. He is speaking about the key ministry of the Church to bring about the reconciliation of souls with God and with others.

For the Church to engage in this ministry requires deep wisdom:

Pray for your ministers that they may have more than the wisdom of Solomon, even the wisdom of Christ, to engage in such a delicate and profound ministry of the unlocking and unbinding of souls bound by sin.

Christ’s other teachings assure us that this call to forgive others is a call to each one of us. Our peace with others comes about primarily, by our forgiving them. But this may be the hardest thing in this life to do.

As I have loved you, so should you love one another.  His dying for us, His forgiving of us of every sin we have ever committed – these are primary ways that God reveals His love for us.  God also knows forgiveness is too hard for us – so he gives us supernatural power, even His Spirit, to enable us, in time, to do the same – to forgive others.

Jesus breathed on them, and said to them, Receive the Holy Spirit – and Jesus has breathed that same Breath of new life on us in giving us His Spirit in our baptism and as we turn to Him in faith.  And he says to each of us this morning, As I have loved you, so should you love one another.

Our ability to forgive others – flows from our knowledge and inner certainty of Christ’s forgiveness of us, and from the gift of His Spirit dwelling in us.

Can you think of any distress of the human soul, that the death and resurrection of Jesus does not touch?

To all of our insecurities, to all of our fears, to all of the disquietudes of our souls, Jesus says to us this morning, as he said to the disciples on the first day of the week – Peace be with you.

In the Holy Communion of the Body and Blood of Jesus, we show forth His death. And as we pray the words of the prayer of Consecration over the bread and the wine, we believe that by Word and Spirit the risen Jesus comes into our midst in a special way.  It is why after these words are spoken, there is a little silence, a moment of awe, a moment for adoration.

Let us rest there in that silence, in the peace that passes all understanding.  Then let us partake of His Body and Blood which he gives us freely – it is truly a foretaste of the perfect peace we will know forever in heaven.

And as we ponder the great gift we have just received, let us recall his words,

As the Father has sent me, even so I am sending you.