Over the past couple of weeks, in the daily readings, we have been following through two stories in the Bible in parallel – the Old Testament book of Deuteronomy and the Book of the Acts of the Apostles.  This follows a very ancient pattern in the Church

It is wonderful to read these books side by side.

Deuteronomy is the last of the Books of Moses.  Moses is giving his farewell speech to the people of Israel, and he is recounting the history of what God has done in bringing the people out of Egypt, through forty years of wilderness wandering. They are just about to enter the Promised Land. Moses will not be going with them, so the speech to them is full of sorrow, even while the wait in expectation of joyful fulfilment of their journey.  Moses will soon die, but he will turn over his leadership to Joshua, who will lead them into Canaan.  Moses recalls to them all that has happened.  He’s telling them about the past that they might always remember God’s loving kindnesses, and he’s telling them about the future fulfillment of the promises of God.  It is a physical land that they will inhabit, but they can only stay in that land if they are obedient to the Covenant. Their dwelling in the Land outwardly, is to be accompanied by a transformation of their hearts inwardly.

Acts of the Apostles, is the most important history book of the early Church.  It begins with Jesus ascending into heaven, and His promise to send the Holy Spirit, His Spirit, to bring them into all truth.  He tells them that the Promised Land is the Kingdom of Heaven, it is not a particular physical location, it is in every place where God reigns supreme.  It is a spiritual space where truth and love, justice and mercy, are mingled. It is every bit as much a new frontier for the Apostles and for all those who will be converted to the living God as was the move into the Promised Land for the Israelites. Jesus said when he spoke with the woman of Samaria at the well, “Woman, believe me, the hour is coming when you will neither on this mountain, nor in Jerusalem, worship the Father… The hour is coming, and now is, when the true worshipers will worship the Father in spirit and truth…”  [John 4:21, 23]  The Apostles are told to go teach all nations and baptize them.  They are not to dwell in a particular Land, but every land, with a new heart, and a new spiritual vision.  A new landscape has opened up and the new Joshua, Jesus, is leading them into it – the kingdom of heaven on earth.

To the early Church and to us, the earlier experience of Israel is a figure of and a treasure chest full of wisdom for the experiences of the new Israel.

So when Peter says today [1 Peter 2:11-17], “I urge you as sojourners and exiles”, he, being a Jew, has well in mind this foundational story of Israel of exile and wilderness wandering to the Promised Land.  Jesus tells us that we can see and can enter that Promised Land, God’s kingdom, by passing through the Red Sea, being washed in his blood, through the waters of Baptism and through faith. [John 3]

The appeal of Peter in his letter is not to the establishment of a particular home on earth, but that in whatever place you live, there the Kingdom will come:  Be subject for the Lord’s sake to every human institution, whether it be to the emperor as supreme, or to governors as sent by him to punish those who do evil and to praise those who do good.  It is not about the establishment of an earthly state.  The Gospel is universal, it can be experienced in every place, it is a space opening up in our soul and in Christian community, and as that community expands, it transforms whole societies.  Honour everyone, Love the brotherhood (or, the family of believers), Fear God, Honour the emperor.  Our allegiance to God is above our allegiance to earthly powers, as Peter shows us when he is arrested and told to stop speaking the Gospel, he says, “We ought to obey God rather than men” [Acts 5:29].  And our allegiance to the Church is above our allegiance to those outside the Church, as that is the place that more clearly articulates and seeks to live in the kingdom of heaven – it needs to be strong and built up to nourish believers and as a witness to the world of the kingdom of heaven.

It is the universal experience of every person, that this life is one of suffering, and since in the Kingdom of Heaven there is no longer any pain or sorrow, we know that we are not there yet.  We are on pilgrimage to that spiritual place.  We experience something of it now when we experience God’s love directly and from others, and we hope to enter it more fully in our future life here and completely in the life to come.

Both Egypt and the Promised Land are always with us now – both outwardly and inwardly.  The experience of slavery and of freedom are always with us now.  We are to moving from the one to the other even now, inwardly, with every word we speak and every decision we make.  And we can move towards one realm or the other, towards slavery or towards freedom, as we are disobedient or obedient to the call of love.

And the movement is not primarily outwardly in a political way, though how we move outwardly is a reflection of where we have moved inwardly.  The kingdom of heaven opens up within us or that possibility closes down.  That’s why Peter says, I urge you, as sojourners and exiles, to abstain from the passions of the flesh, which wage war against your soul.  He’s describing an inward journey of transformation.  The passions of the flesh – summarized as pride, vainglory, dejection, wrath, sloth, greed, gluttony, lust – they are there in every human soul – they war against us.  [It is not surprising that the Fathers summarized them under 7 or 8 headings, as that equals the number tribes that Israel had to battle to dwell at peace in the Promised Land (seven in Canaan plus Egypt).]  Within each of our souls lies the possibility of returning to Egypt or moving on to the Promised Land.

Jesus says, this shift inwardly from the one realm to the other, is something that he has come to accomplish in us. 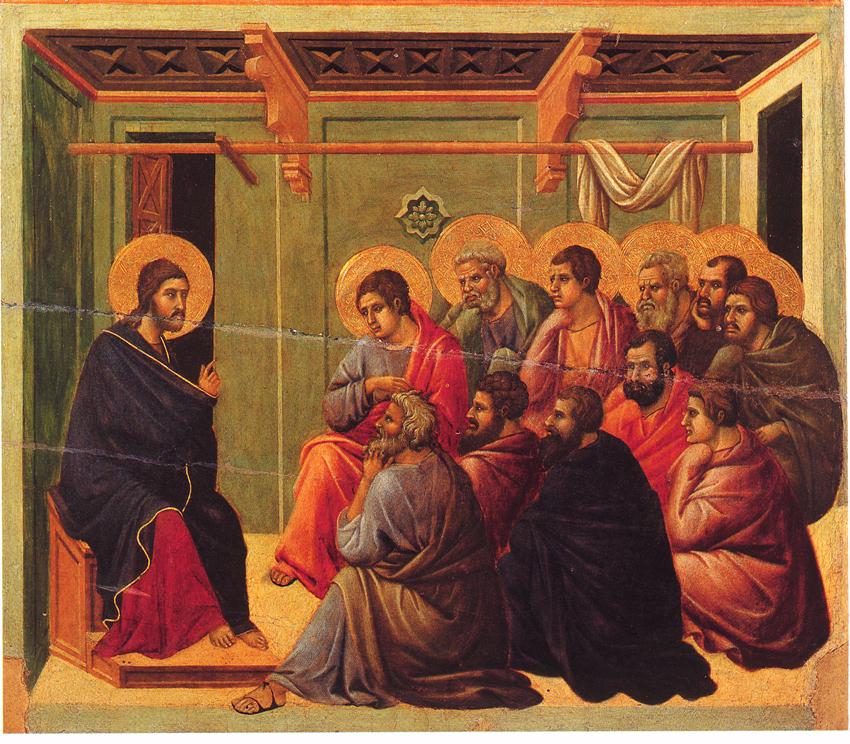 Our Gospel reading [St John 16:16-23] is Jesus’ farewell speech to his disciples on the night before his crucifixion. He is the new Moses, and he gives a speech like Moses did at the edge of that Promised Land.  But he doesn’t say that another, Joshua, will bring them into the Promised Land – he says, I will see you again, and your hearts will rejoice, and no one will take your joy from you.  In this, Jesus is promising his Resurrection.

Jesus says quite plainly that our life of suffering is worth it if we live it in faith.  It is like a woman giving birth – there is sorrow and suffering on the day of giving birth, but that is transformed at the joy of seeing a new human being born into the world.  Allof our suffering, borne in faith, become the birth pangs of entrance into the Kingdom of heaven.

Our first reading is the climax of the story of Joseph in Genesis when the path of his life became clear to him [Genesis 45:3-10].  Joseph did not understand until that point the Providence of God, and how all his suffering from being sold by his brothers into slavery would turn out well.  He did not know how all his sufferings from being falsely accused of rape would turn out well.  He did not know how his years of suffering in prison would turn out well.  And then he was suddenly brought from the depths of prison to the heights of power in Egypt, and he saw that it all had a purpose: the saving of Egypt and his whole family and the transformation of his own soul – the psalmist describes that bondage as transformative, the iron entered into his soul. [Ps 105:18]  He became a man, with courage, with strength, with wisdom.

Let me give you a moment to think about something that happened to you a few years ago, that seemed at the time to be only suffering and only destructive…  Did it lead you to a change in your heart, a real transformation out of that suffering into new life?  And when I say new life, I mean a true deepening of your compassion, a true widening of your vision of what life is about, a true growth in wisdom and love.

Perhaps today you are still in the midst of some new suffering, and you’re not out of it yet. The Old Testament Lesson about Joseph and our Epistle and our Gospel today are full of hope, assuring us that transformation happens for the good always when we bear our suffering in faith, in expectation.  God is a Good Shepherd, as we were reminded last week, there is an overarching Providential ordering of all things.  Can you see any signs yet, of that goodness, bringing you along?

“A little while and you will see me no longer.”  This is the experience that every one of us has when we suffer and we wonder, where is God in this?  Has God brought us into this wilderness to kill us?  What is the purpose of this?

If we bear these moments in faith, again a little while and you will see me… So also you have sorrow now, but I will see you again, and your hearts will rejoice, and no one will take your joy from you.

This morning the risen Christ makes himself present to us, in the midst of our suffering, in the holy Communion of his Body and Blood given for us.  We partake not of a dead Christ, but of the living Lord.  Let us now prepare ourselves through repentance and faith to receive him.

Again a little while, and you will see me.