Set your minds on things that are above!

The strife is o’er, the battle done;
the victory of life is won;
the song of triumph has begun.
Alleluia!

Every Sunday, but especially today, we proclaim and celebrate that Jesus has risen from the dead!

Our Gospel today [St John 20:1-10] speaks only about the empty tomb, the first moments of the realization of the Resurrection.  It dawned on the disciples Peter and John first by the absence of his body, rather than from seeing him.  It says when John “saw the linen cloths lying there, and the face cloth, which had been on Jesus’ head, not lying with the linen cloths but folded up in a place by itself” he believed.  And that belief was affirmed soon after by Jesus’ resurrection appearances.

The bodily resurrection is a strange claim, and the accounts of it are strange.  Sometimes Jesus could be recognized, but the disciples thought he was only a spirit, but he said no, and he ate a piece of fish in front of them.  Jesus told the incredulous Thomas to put his fingers in the marks of the crucifixion in his hands and side.  And yet this same body is different – Jesus can appear in a room whose doors are locked, he can walk alongside fellow travelers to Emmaus without them recognizing him until he broke bread with them – and then he suddenly disappeared.

Jesus affirms in his resurrection that the material reality is not something finally to be liberated from, but rather, that our body is to be taken up in the spirit.  It is an affirmation of the material realm of creation itself, a glorifying of the body.

This claim brings, to those who believe in it… wonder, partly because it is inexplicable – the creation is far stranger than we can imagine.  But also, as it sinks in, this promise frees us from the fear of death, or at least there is a lessening of our terror of it, and also a lessening of the tragedy of it.  In the face of the death of ourselves or of loved ones there is now, always mingled with it, a holy hope.  It is a hope that we are told we can trust in.  We are told, and now shown by Jesus, that the Resurrection is a sure and certain hope of eternal life!

What that life is, we don’t know, but the doors of heaven are opened wide to a redemption way beyond that known by Adam and Eve in the Paradise of Eden, way closer to God.

But the claim of the Resurrection also speaks to the present circumstances of every one of us here today:

What is that life we hope for in Paradise?  The hope of a fuller life – wholeness, being more true, more authentic, in our encounters with others, able to love our neighbours better, able to use our gifts to their full in being creative, ever growing in wisdom, more able to deal with the suffering and tragedy that is a part of our existence in this wilderness journeying to the eternal city.  And experiencing greater closeness with God.  Would that God might speak to me!  Would that God might show me his face!

Jesus promises us that we needn’t wait until we reach the heavenly Jerusalem.  The risen life can be experienced in the here and now.

But here is the rub.  It involves first a dying.

If you gave up chocolate for Lent, you might have been surprised to notice that at the very same time, the stores began offering up chocolate Easter eggs – they were everywhere!  The world understands, and naturally wants to capitalize on our desire for rebirth.  But it has a harder time with the idea of the Cross.  It’s harder to make something simple to sell over the counter that will remind us of the Cross – would we buy it?

It’s clear that there can be no Resurrection of Jesus unless there is first the death of Jesus.  The disciples didn’t want to believe this and we don’t want to believe this.  But there can be no new life in us, unless we put to death in the present the things of that old life that are a contradiction to the life of Jesus.  And to die to something hurts!

Paul says, Put to death therefore what is earthly in you: sexual immorality, impurity, passion, evil desire, and covetousness, which is idolatry.  [Colossians 3:1-7]  And this call to attend to outward actions and our thoughts is something repeated in every Epistle in the New Testament and it flows from Christ’s call to live a virtuous, a holy, life.

Half measures will not do – death now or no new life now.

Death is painful – are we willing to undergo the radical surgery to our lives?

Why is it so difficult? – because to give up these things feels a bit like chaos, the new life is unchartered territory, and we may not see immediately the new life that is promised on the other side of that little death… but there is a resurrection.  Are you and I willing to wait at the tomb of our souls until new life springs forth?  Or, put another way, will we return to Egypt – to what is known but also a bondage?  We need courage and faith to step out into the unknown.

This advice to leave destructive ways and ideas is surely good for anyone and could be made by anyone, what is a particularly Christian approach to it?

Jesus helps us by his grace with this dying that we might be reborn.

In our baptism into Jesus we went under the waters, it is a symbol of drowning to the old life, of dying with Jesus on the Cross, that we might rise in Him, joined truly into His risen body.  Paul says, you have died and your life is hidden with Christ in God…you have been raised with Christ.  “Have died” and “have been raised” are past tenses describing our present reality.  And we are given the gift of his Spirit to dwell in us.

Paul says elsewhere, whoever is in Christ, is a new creation. The old has passed away; behold, the new has come. [2 Cor 5:17]  But Paul and the other Apostles also acknowledges that we live now in a kind of contradiction – the old Adam is still here – put to death therefore…, and the new person in Christ is also here.

Our Collect for today (from the 5th century!), the prayer that gathers up the thoughts of the readings into an intercession, speaks of the very simple way that God brings about in us the Resurrection life now.  We pray that, As by your special grace you put into our minds good desires, so by your continual help we may bring the same to good effect.

God is now actively putting good thoughts into our hearts and we need his grace also to act on them and so embody those good thoughts in our life – that is how we become like God, by acting on every good desire.

So our resurrection comes about by turning within, to discern those good desires that are being placed into our minds by the Spirit, and then following them.  We know that there are also evil thoughts arising in our hearts all the time [Mark 7:20-23], that’s the old Adam, and we are to ignore them – that kills them in time – like a parent who does not respond to the unreasonable demands of a child no matter how persistent, and that demand stops in time.

Whichever ideas or desires we chose to follow, we will actually become those idea or desires – they actually become embedded in the neural networks of our minds!  This is a scary or a wonderful thought, depending on whether we follow what is evil or what is good.

We know from reading history something of the depths of hell that human beings can descend to – we can think of the stories of extreme cruelty in the concentration camps under the Nazis or the Communists, and every day we are reminded of the cruelty to which the human heart can descend in the daily news.  But  there seems to be no limits to the heights to which we could soar if we simply followed every good desire in our hearts – embodying the Word, the eternal Logos step by step – changing our minds.  Jesus says, “Truly, truly, I say to you, whoever believes in me will also do the works that I do; and greater works than these will he do!” [John 14:12]  The sky is the limit!  The saints through the ages have shown us something of that sky – imagine what could happen if every one of us here followed every good desire in our hearts!  [see from 34:10 in Jordan Peterson lecture: Psychology of Redemption in Christianity, though I think his understanding of the atonement is limited.]

All of us have embodied bad ideas and followed destructive paths, despite our baptism into Jesus, but he has given us another means by which we may be freed up.  It is the Pascal feast, the Holy Communion of Christ’s body and blood given to continually help us. 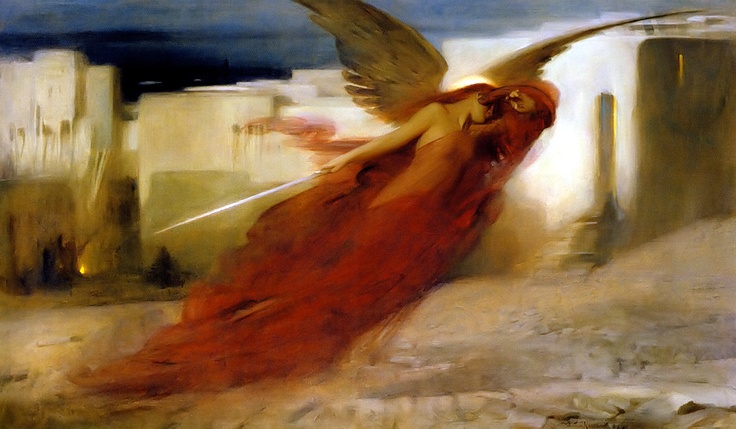 As we heard in the first lesson, Israel was told the way out of bondage in Egypt was to sacrifice a lamb and to put the blood on the door posts, that judgement might pass over them. [Exodus 12:21-28]

We are told that our way out of bondage is to trust in Jesus’ sacrifice.

We confess our failed ways, our self-deceptions or deceptions of others, our holding onto lies or limited ways of thinking.  And we are assured by Jesus that the ways of hell that have opened up in us, can be closed off: by his Blood judgement passes over us; by his Blood we are cleansed.  And Jesus will strengthen our wills by his Body to follow in our daily life every good desire – the new risen life.

Set your minds on things that are above!

Christ is risen, and this is how we can rise with him even now.  Alleluia!