This morning we continue to bathe in the light, and to know in our hearts something of the joy, of Christ’s Resurrection. 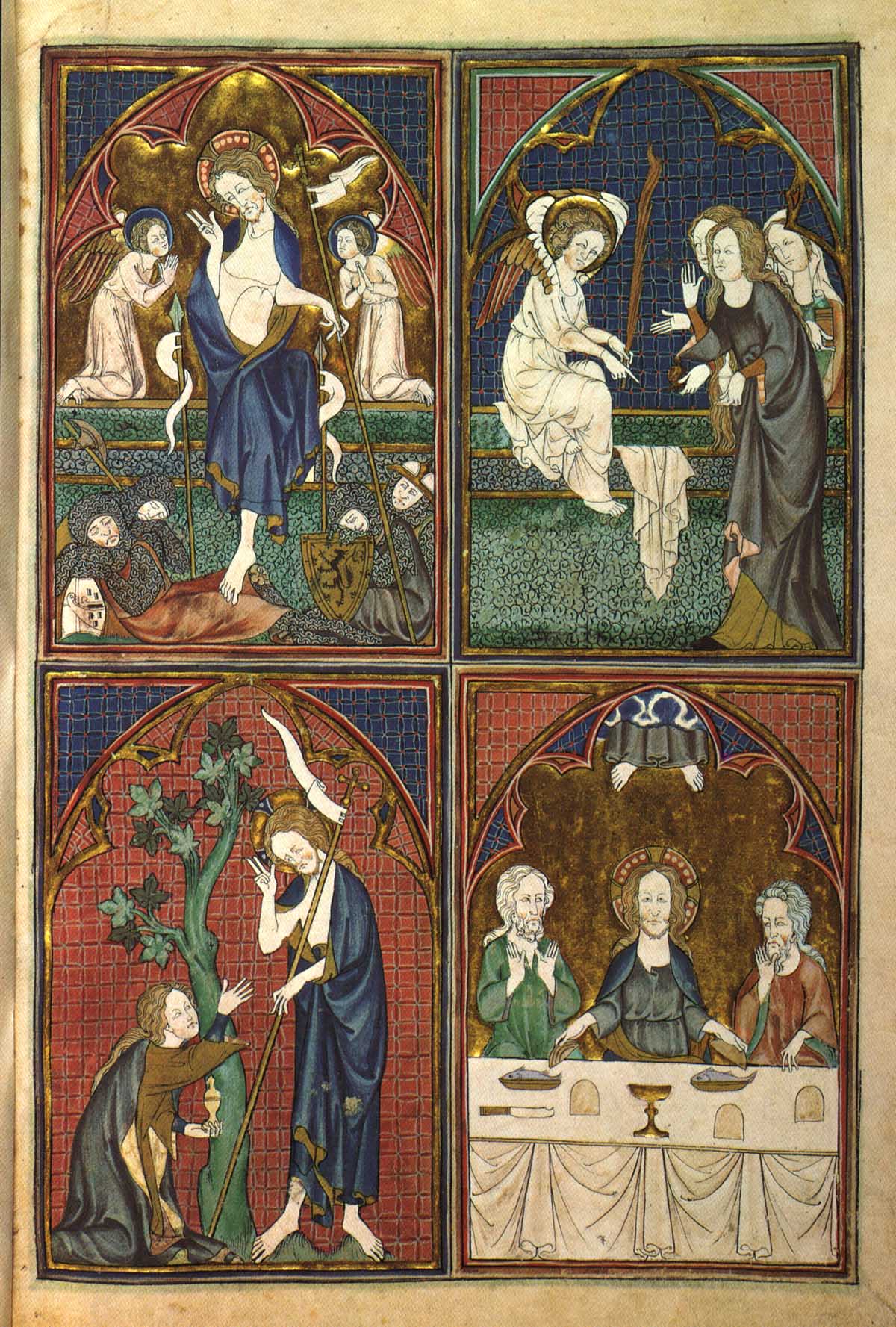 In the first Gospel readings for Easter from St Matthew and St John we are not even shown our Lord – but only the empty tomb – death cannot contain Jesus, and it cannot contain us – the worst that the world, the flesh and the devil can do, cannot touch our Lord who is without sin.  And for all those who believe in Him, who trust in His self offering, who are united to Him through baptism and faith, we share, we participate, we enjoy the benefit of, a new and eternal life that begins now, but will be utterly transformed in the life to come.

Mary Magdalene and the other Mary who saw the empty tomb, could not at first fathom what it meant, but excitement was stirred in them, enough hope was rekindled, to make them run to the disciples to tell them of the empty tomb.  Peter and John ran to it, and first began to believe – but in what?  What is the Resurrection?

Here is what one preacher (Fr Robert Crouse) has said:

In spite of all that Jesus had told them beforehand about his death and resurrection, the fact was simply too astounding to be grasped immediately. …

But their incredulity should not surprise us: after all, the resurrection was for them as indeed it is for us, something completely outside the bounds of our imagination–a reality accessible to faith, certainly, but not something we can really picture in our minds. We can imagine the resuscitation of a dead body–the raising of Lazarus, for instance; or the widow’s son at Nain–we can imagine that.  But that is not resurrection. Resurrection is not the revivifying [or bringing back to life] of a body, to continue as before.  Resurrection means the spiritual transformation of the flesh, to be the clear and translucent expression of the spirit.  It means life of an altogether different quality, on an altogether different level, and we can’t imagine that.  It’s outside our experience.

Imagination and common sense rebel before the thought of resurrection. “How are the dead raised up, and with what body do they come?” “A foolish question”, says St. Paul.  Just consider, he says, the astonishing transformations which go on in God’s creation every day.  Just think, for instance, what happens when you plant a seed – perhaps a grain of wheat, or of some other grain – the seed decays, but from that seed appears a plant unimaginably different from the tiny seed you planted.  “God gives it a body, as it has pleased him, and to each seed its own body”.  “So also”, says St. Paul, “is the resurrection of the dead. It is sown in corruption; it is raised in incorruption… it is sown a natural body; it is raised a spiritual body”.

The world of nature, with its cycles of decay and rebirth, offers many parables of resurrection: but only parables: resurrection means a kind of transformation which is utterly beyond the processes of nature, a reconciliation of flesh and spirit, a redemption of our whole humanity which is final and complete.  No imagination, but only faith, can grasp that God, who brings all things from nothing in creation, brings life from death, and glory from corruption.  And only the fact of Jesus’ resurrection, and faith in his promises, can establish the ground of this hope in us.

This morning our Gospel speaks beyond the empty tomb to one of the first appearances of Jesus.

Remarkably, we learn of two men, Cleopas and a fellow disciple, whom we hear of in no other place, who were early witnesses to Christ Resurrected.  They were pondering the staggering events of the death of Jesus on the Cross, and simply of the first news that the two Marys had seen the empty tomb.  And then, Jesus comes along side them to walk with them.

These two disciples had left Jerusalem before the Marys had returned to tell the disciples that they had now seen Jesus.  And when these two returned to Jerusalem after their encounter, they discover one other encounter with the risen Lord that is nowhere else mentioned in Scripture:  that Jesus had appeared to Simon Peter – a special gift of love to the one whose grief was no doubt compounded by his thrice denial of his Lord.

The road to Emmaus encounter is wonderful in many ways.  It sounds like something that could happen to any of us – and perhaps makes us wonder about certain encounters we may have had with a stranger that changed our life, drawing us closer to Jesus, and left us later wondering – who was that man?

Their hearts burned within them as Jesus opened up to them the Old Testament preparation for His death and resurrection.  Imagine meeting the perfect Biblical commentator – God Himself in the flesh explaining his written Word, showing how all the types relate to Him.  We can image that some of the references in the New Testament to the Old, stem from this very encounter.

And the encounter is greatly told – we are all aware of who the stranger is from the start – we read the story from God’s perspective: While they were talking together, Jesus himself drew new and went with them.  But their eyes were kept from recognizing him.  We get to enjoy their slowness and their incredulity.  This is our God – who chooses hiddenness and surprise and walking alongside us, in a kind of loving enjoyment of his children.

And here is a line that is most wonderful.

So they drew near to the village to which they were going.  He appeared to be going further, but they constrained him, saying, Abide with us.

Imagine, God comes close, but then he doesn’t want to impose himself on us, the King of all glory, our Maker and Redeemer in all his glory, doesn’t want to impose Himself on us!  He tells us what we need to know for our souls’ health, but then he appears to be going further – where would He be going?  He waits for us to really decide that we want Him.  And if we want Him, we can have Him.  If we seek, we will find; if we knock, it will opened to us; if we ask, it will be given to us!

And of course, when invited, Jesus then made Himself known to them in the breaking of the bread.

We can know Jesus’ risen presence, this morning in the Holy Communion – Christ communicates to us not His dead body, but His Risen life, and from that foretaste, we leave off fear and we grow in the joy of His promise to each of us.

In this Passover meal, judgement passes over us, passes by us, as we trust in His offering – true peace comes to our hearts, there is certainty of reconciliation with God, and love is rekindled in us.  We step out of our situations of bondage and slavery to the past, to walk, in faith, in the new life that He’s communicating to us and bringing about in us.

Christ our Passover is sacrificed for us, therefore, let us keep the feast!