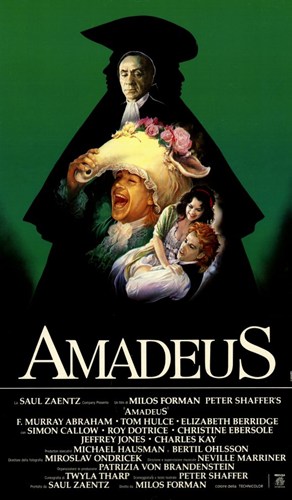 One of the better film dialogues I’ve ever seen is the one between the old composer Antonio Salieri and a priest who wants him to confess in the film Amadeus (1984).  In this film, where Salieri’s rivalry with Wolfgang Amadeus Mozart is a central theme, we see how the overambitious Salieri becomes more and more envious for Mozart’s superb musical talents.  Salieri is himself a famous composer in Vienna, but no matter how hard he works and how devoted he fulfils his duties to God, he seems incapable of beating the immoral Mozart when it comes to composing.  Deeply embittered and highly disappointed in God and life, he decides to devote the rest of his life to countering the work of God and Mozart.  And then, at the end of his life, Salieri is visited by a priest who, to his pleasant surprise, appears to have had some musical schooling.  A sparkle of hope is visible in Salieri’s eyes when he plays a short melody he’s once composed, to see whether the priest knows it.  But to Salieri’s surprise and disappointment, the priest doesn’t recognize it.  Salieri tries again with another melody, but to his own regret the priest doesn’t know this melody either.  Utterly disappointed, Salieri cries out: ‘Can you recall no melody of mine?  I was the most famous composer in Europe when you were still a boy.  I wrote forty operas alone.  What about this little thing?’  Salieri plays another melody, and this time we can see the relief on the priests’ face as he hums along and happily acknowledges that he knows the tune: ‘Oh, I know that! That’s charming!  I didn’t know you wrote that.’  Salieri’s face falls, when we hear him say: ‘I didn’t.  That was Mozart.’

There are some interesting similarities between this film and the story of Joseph and his brothers that I would like to draw your attention to, all related to one of the so called seven deathly sins: Envy.  These seven deadly sins, or vices, are the counterparts of the virtues we’ve begun looking at this season.  For those of you who’ve missed this: we’ve been talking about seven virtues over the last year: love, hope, faith, prudence, temperance, courage, and justice.  Like these virtues, vices are habits or character traits: you’re not born with them, but during your life you can become increasingly more, or increasingly less virtuous, envious etc.  Virtues and vices are habits that become part of your character – either positively or negatively.  This helps us to see the difference between a vice and a sin: a sin is a single act, but a vice is a deeply rooted pattern in our character.

So what characteristics of envy can we discern from both Salieri and Joseph’s brothers? The first thing we notice is that there seems to be a misconception of the meaning of love:

Joseph was hated by his brothers because they felt rejected by their father and unworthy of his love. Love has become conditional here: Jacob loved Joseph more than his other children, because he was the son of his old age.  As the brothers’ feeling of self-worth is defined by the conditional love of their father, Joseph becomes a natural rival – one that needs to be eliminated.  The same goes for Salieri: Salieri seems to be a successful and happy man, but because his identity is built on the fickle love of the society he lives in, the foundation of his life is being threatened by the brilliance of Mozart.  Building your identity and feeling of self-worth on conditional love clearly has devastating consequences – both for you and your rival, since envy is directly opposed to love.

But there’s more to the comparison between Salieri and Joseph’s brothers.  In both stories, the enviers resent their current situation and may even be disappointed in life, their family and especially in God, so they decide to change this situation by taking action.  But when they undertake action they do this in secret, never in the open.  Since the envier feels cheated by others, life, or God, but at the same time measures his self-worth from the perspective of inferiority, open warfare will be avoided whenever possible.  Salieri treats Mozart in a very friendly manner in public, but in secret he corrupts his career.  Joseph’s brothers cast Joseph in the pit when they’re alone, but tell another story to their father.  When you’re envious, you’ll try to hide it in public, since it would be shameful to admit that you feel inferior to your rival.  There’s a list of ways in which envy may manifest itself in our lives, and most of them are done indirectly or behind someone’s back.  Some examples are:

It’s interesting to look at this list and try to think of whether any of these forms are actually relevant in your life.  Studying envy can teach you something about yourself in more ways though, for instance by asking the question who you are envious of.  You’ll notice that you’re probably not envious of someone who has a very different lifestyle or who is vastly more talented than you, but someone whose life is not all that different from yours – just a little bit better in your eyes.  Joseph’s brothers’ enviousness tells us that Joseph was their rival for their father’s love.  Salieri’s envy for Mozart says something about his ambitions and the foundation on which he built his identity.  Meditating on who we are envious of, might reveal to us something of what we base our lives upon.  We humans have the tendency to see life as a competition, and we’re constantly comparing our lives to those of others.  As we’re comparing our lives, our possessions, and our achievements constantly with others’, there are always people around us who seem to threaten us, people we might be envious of.  And often these people are in a comparable situation: classmates, friends, colleagues, teammates, neighbours etc.  Lionel Messi will never be my rival, but young people around me who are in a comparable situation to mine might.

A last and very important characteristic of people consumed by envy, something we see reflected in both stories, is that they’re doomed to lose: if we were to appoint winners in these stories, it’s clear we’d choose Joseph and Mozart.  And this is not only because they were more successful, but especially because envy has led Joseph’s brothers and Salieri into a life of hatred, fear, and resentment.  Envy is a losers’ game, because it pursues happiness in a way that will necessarily lead to unhappiness.  A person filled with hatred and fear will never be truly happy.

So how do we fight envy?  I would like to mention three things:

The seven deadly sins together have been illustrated as a tree that brings forth poisonous fruit, and pride is its root.  In order to fight any of the vices, we need to start at the root: in what situations did I consider others to be inferior? when have I looked down on others? when have I forgotten that I’m utterly dependent upon God, and instead tried to earn my own salvation?  These are questions I need to ask myself constantly; the rooting out of pride requires confession and a begging for grace.

We saw that envy is the result of a misconception of love, so in order to fight envy we need to realize who we really are: the beloved children of God.  Realizing that God’s love is unconditional, saves us from measuring our self-worth by what we do or have or what other people say about us.

Envy is a vice, and a vice is a habit.  To fight this habit of unhealthy competition, it might be helpful to find ways to reach out in love to people who will not be able to reward you, and without other people knowing it.  In this way you might be able to grow in love, but there’s no danger that you’ll start a rivalry with others in a vain competition of who’s the better Christian.

For me, receiving Holy Communion on Sunday mornings here in this church brings together these three points.  At the altar we get to kneel down and literally beg for mercy, like father David reminded us last Sunday.  But then when we walk back, I often can’t help looking at the wonderful stained glass depiction of Jesus Christ on the Cross in our West window.  And there I see the historical and amazing proof of God’s unconditional love for us, since it’s quite obvious to me that I have never performed anything in my life that makes me deserving of such an offering.  Being aware of this, finally, should always lead me to the conclusion that this will be a good week to share His love with others.