“Do not be overcome by evil, but overcome evil with good.”

Epiphany season is a meditation on Christmas – we think about and are hopefully moved by our consideration that God has come to us in the flesh in Jesus Christ.

We have come to know Jesus as a king for all peoples, as a boy in the Temple revealing himself as the Wisdom of God, and last week and today he is revealed as the Power of God in him miracles (1 Cor 1:24) – changing water into wine and today in acts of healing.

God has come to heal us, and as his image and likeness, he sends us to heal others.

This healing he is bringing is profound – it is not just about sick bodies being made whole – though it is about that too.  But when we look at the circumstances of these healing miracles today there are other layers that are being touched – and we might even wonder if they are more important than bodily sicknesses.

In the Gospel there are two healing miracles.  In the first:

Behold, a leper came to [Jesus] and knelt before him, saying, “Lord, if you will, you can make me clean.” And Jesus stretched out his hand and touched him, saying, “I will; be clean.”

Jesus is not afraid to touch the man, which under the law of Moses would have made Jesus unclean.  With Jesus purity flows from him to the unclean man, not uncleanness from the leper to him.

Jesus wants to restore the man’s body, and in so doing, also restore his relations with the community in which he lived.  See that you say nothing to anyone, but go, show yourself to the priest and offer the gift that Moses commanded, for a proof to them.”

It’s not hard to see a comparison with our times with corona – the isolation, and then getting proof that we are corona free and able to walk freely about again.  The sickness is not just individual but always has a social implication.  And if we think about it, even in pre-corona times, there has always been an element of separation from community that is associated with bodily sickness.

Isolation is not something that God intends for us – community life is to be normative as a part of being human.  Heaven is described as a garden, but it is also a city… [e.g. Revelation 21]  Something in us is brought out in friendship with others in community – our excesses are curbed, and other people draw out of us hidden beauty.  To Adam in the garden, God says, It is not good for the man to be alone. [Gen 2:18]

So when we think of Jesus’ healing the lepers – we are also thinking about how he is restoring community on earth as a figure of and participation in the Kingdom of God.   Think of the fairy tales you’ve read, after a time of trial, often, at the end, all come together in a celebration of restored community.

The second healing miracle also has this dimension:

When Jesus had entered Capernaum, a centurion came forward to him, appealing to him, “Lord, my servant is lying paralyzed at home, suffering terribly.” And he said to him, “I will come and heal him.” 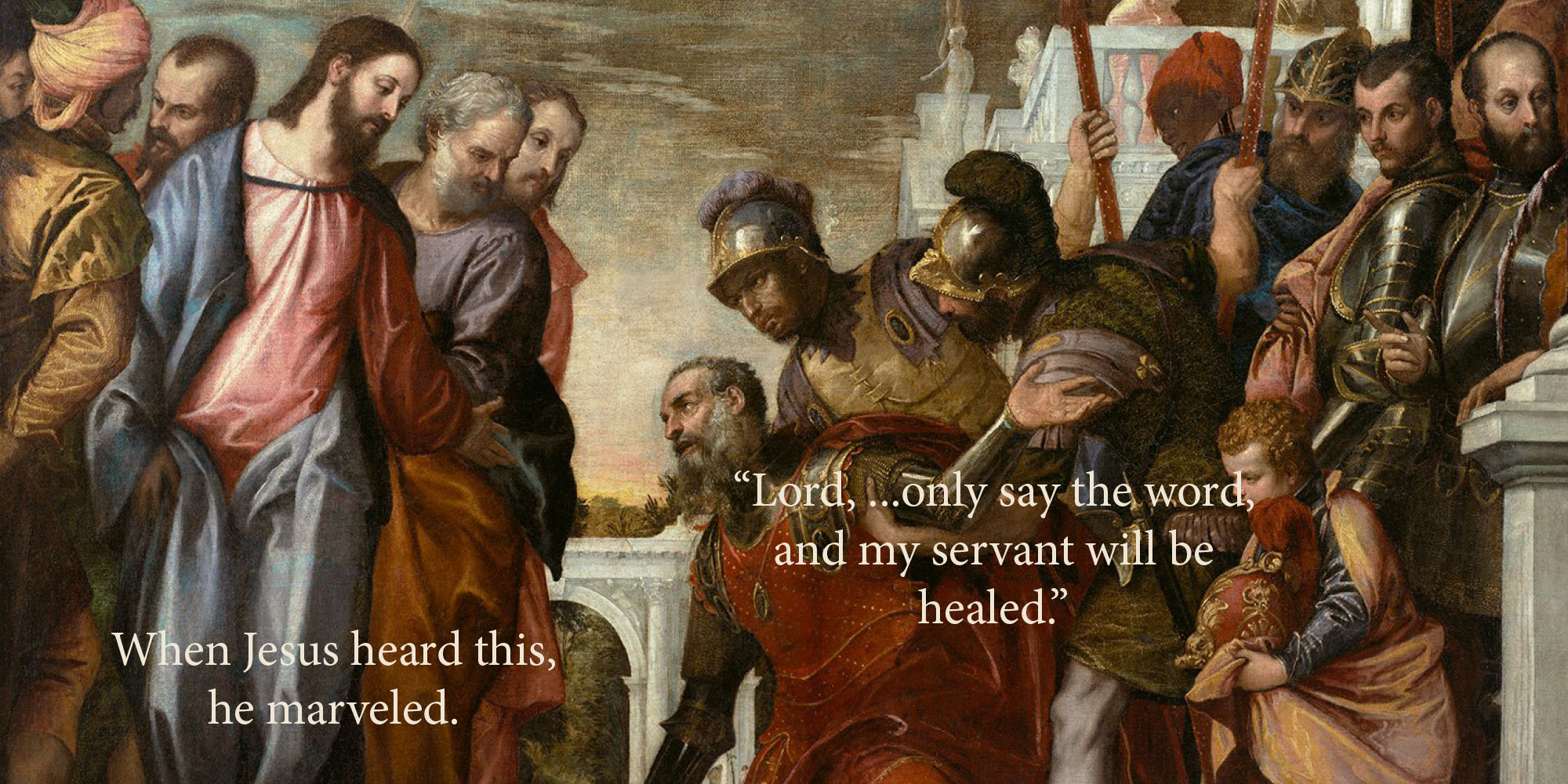 It is not at all obvious to us when we read this at first how unusual the encounter is.  We must remember that the Romans were an occupying force in Israel.  They enforced their rule with brutality – they were not loved by the Jewish people.  And yet this Roman soldier, out of care for his servant suffering at home, seeks out this Jewish teacher, and humbles himself before him, calling him Lord.

Jesus offers immediately to come to the home of a Gentile (a non-Jew) and to heal him.  Jesus is offering to enter the house of the “enemy” of Israel, and a Gentile, which the customs of the time said it would make him ritually impure.  Again, impurity will not flow to Jesus, but purity will flow from him to others.

The Roman centurion seems to know about Jewish custom – I am not worthy that you should come under my roof, but only say the word, and my servant will be healed.

He says he understands authority – and Jesus surely can just speak and it will be done.  And Jesus commends his great faith.

We can imagine that the miracle of the healing of the man is almost secondary to the message that the disciples and others gathered around are hearing.  The bitterness and deep suspicion in their hearts towards every Roman, is being affected, melted, as they see Jesus responding so generously towards their mortal enemy.

The demonizing of “the other”, so easy for us to fall into, is broken through.  The community of our common humanity is being asserted and affirmed by Jesus.

“Truly, I tell you, with no one in Israel have I found such faith. I tell you, many will come from east and west and recline at table with Abraham, Isaac, and Jacob in the kingdom of heaven…

To have been there that day – the people gathered would have had their world view shattered and expanded greatly.  They would never be able to look upon a Roman again in the same way. They might be right to look with some suspicion, not to be naive, but they would also be challenged to see the humanity.

Today’s Gospel reading is in fact the very first passage after the Sermon on the Mount.  Our Gospel started with – When Jesus came down from the mountain, great crowds followed him.  These two miracles are Jesus demonstrating his teaching by his own actions:

“You have heard that it was said, ‘You shall love your neighbour and hate your enemy.’  But I say to you, Love your enemies and pray for those who persecute you, so that you may be sons of your Father who is in heaven. For he makes his sun rise on the evil and on the good, and sends rain on the just and on the unjust. For if you love those who love you, what reward do you have?…   You therefore must be perfect, as your heavenly Father is perfect. [Matt 5:43-48]

And so Paul is taking up this teaching in today’s Epistle:

Live in harmony with one another. Repay no one evil for evil… If possible, so far as it depends on you, live peaceably with all. Beloved, never avenge yourselves, but leave it to the wrath of God, for it is written, “Vengeance is mine, I will repay, says the Lord.” To the contrary, “if your enemy is hungry, feed him; if he is thirsty, give him something to drink; for by so doing you will heap burning coals on his head.” Do not be overcome by evil, but overcome evil with good.

The restoration of community life is at the heart of the Gospel of Jesus Christ.  Jesus healing miracles are a part of that greater picture.  And it is probably where we find our greatest challenge individually.

We are divided on issues of politics or on contemporary ethical issues or on race or national identity.  What could be more the realm of evil, and contrary to the kingdom of God, than that we fragment into factions hating one another – each asserting brute power to overcome the other.  The attacks on the law makers in the Capital building in Washington by the extreme right – so shocking, are not unlike, or perhaps the next step up, after all the attacks on the law enforcers with the burning of the police stations and other institutions across America over the past year by the extreme left. Violence breeds violence. Jesus shows another way.

The same intensity of division is not here politically.  But everywhere we have strong disagreements – it is human fallen nature to hold on to them and make them worse – how do we move beyond them?  If your enemy is hungry feed him, if he is thirsty, give him something to drink.  Heal him if he is sick.  And in so doing we change both the heart of our “enemy” and our own heart.

Let’s think this morning on those whom we have vilified by our words or by our thoughts – making them “all bad” as opposed to others who are “all good” – what can we do to stretch across the divide.  What kindness can be shown, to acknowledge, to them and also to ourselves, their humanity?  Step out in love, Jesus shows us, and with some risk… and may God’s Kingdom come.  Have you ever experienced this – where you stepped out where it was not expected, and there was a breakthrough in relations between you and the other person? I have known it. Lets make it a habit.

God came into the world in the flesh in Jesus Christ.  He showed us by his life and miracles that this ideal of the full restoration of human community is not pie in the sky, but possible, and how to do it with the hearts that we have.

Jesus stepped into the breach between God and man, and between Jew and Gentile, between friend and foe, to heal and to offer Himself on the Cross before it was asked for and before it was received.  Into the angry mobs and into the cruel hands of lawless man he placed himself in the great chasm, stretching out his arms to reveal divine mercy.

Let us now partake of His loving kindness, His body and blood given for us, and of His mercy.  And then following Jesus, put ourselves into the gaps we see with others – by loving our enemies and praying for those who persecute us.  And may His kingdom come.