When I say the daily offices at home I use Common Worship and not The Book of Common Prayer which is what is used here. So one of the many good things about being here is that I enjoy some small changes in routine, like using the old prayer book. Each morning and evening I recite the invitation to confession and allow its language to resonate with me and be encouraged afresh to : 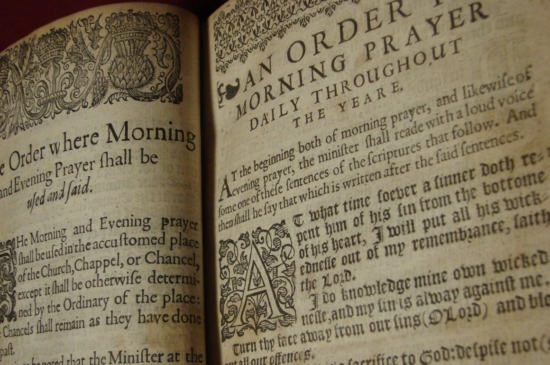 ‘confess our manifold sins and wickedness, and ……not dissemble or cloak  them before the face of Almighty God our heavenly Father…..to the end that we may obtain forgiveness of the same by his infinite goodness and mercy.’

In seeking forgiveness from God this prayer warns me of the danger of self-deception, of cloaking and dissembling – a theme that is picked up in the Gospel passage today which comes from St Luke’s  sermon on the plain – a parallel to Matthew’s sermon on the mount.

Jesus encourages and indeed commands his hearers to be merciful, not to judge, not to condemn, to forgive , so as to be forgiven. A sentiment echoed in the Lord’s Prayer. Then at the very end of our passage Jesus paints a couple of humourous pictures of a blind man leading another blind man, with obvious results and of someone trying to get a speck of dust out of someone else’s eye whilst there is a beam in his own. What hypocracy, what self-deception, what dissembling!

How do we avoid this cloaking and dessembling? Look in a mirror and see ourselves as we really are. The truest mirror for Christians is to look to Christ as revealed in scripture and see how much of him is reflected in us. The introduction to the daily offices tells reminds me each day that, ‘Scripture moveth us in sundry places to acknowledge our manifold sins and wickedness.’  So it is on regularly reading, reflecting and living by scripture that our lives are challenged and changed.

The guidance of scripture is highlighted by the psalmist who writes, ’Thy word is a lamp to my feet and a light unto my path’, (Palm 119.105) – so we may see clearly and not be like the blind. The story of God’s purpose for us is told in Scripture from the very beginning and culminating in Christ and those who seek to follow him. This story of the life, death and resurrection of Christ is our rock. We are reminded of the cost of forgiveness, the lengths to which God goes to give us life of eternal quality.

Godly forgiveness is counter-cultural. We live in a culture that says, “If you cross me, I will sue you or worse.” Human nature wants retaliation, cold, calculated revenge. I want my just deserts. Christians, however, take our cues from Christ, not from culture. We are in the world but not of the world.

What is forgiveness then? A definition which I find helpful is that forgiveness is the disciplined, lifelong commitment to offer Godly reactions to ungodly actions.

Forgiveness also should not be simply equated with forgetting. The slogan “forgive and forget” is a recipe for denial, not a formula for forgiveness. Therapists, following Freud warn of the ‘return of the repressed’, feelings and thoughts we try to forget have a habit of coming back and catch us out. Forgiveness does not require spiritual amnesia. There are some hurts and scars from our past that need to be remembered. An example of this from the bible is the story of Joseph and his brothers. Joseph had been sold into slavery by his brothers as he met them on the road to Dothan. Many years later, when he is ruler of Egypt and his brothers come to buy food there is a scene of reconciliation but I bet that Joseph, even though he has forgiven his brothers has not forgotten the past and would not go down that road to Dothan with them again.

Healing is not found in forgetting; it is found in holy—not hostile—remembering. We remember the hurts of our past not to repeatedly play the role of victim or to hold the perpetrators hostage with guilt. Instead, through a holy remembering, we are empowered to make wiser choices in the present and the future and to help perpetrators do the same.

Remembering the hurts of South African apartheid, Archbishop Desmond Tutu declared that forgiveness draws out “the sting in the memory that threatens to poison our entire existence.” We remember the evil done to us in the past in order to liberate the past from evil. Once the sting of evil is removed, the past is redeemed to impart to us wisdom for today and tomorrow.

Forgiveness does not condone evil; nor does it require us to forget. What it does require is “release,” the release of the negativity and hostility associated with the times we’ve been badly let down, betrayed. In our passage the Greek verb translated “to forgive” also means “to let go or “release”.” Even if justice for our injuries is delayed or denied, Christ compels us to forgive so the desire for revenge will not poison our souls.

Releasing, letting go, forgiving, is costly and is revealed to us at its deepest and most costly on Golgotha on Good Friday, Jesus pleaded with God from the cross for our sakes, “Father, forgive them!”

All of us have been mistreated, let down, deeply hurt at one time or another. Yet Christ, our Great Redeemer, our great Liberator calls us to forgive because we have been forgiven. As Archbishop Desmond Tutu says, “We must forgive if there is to be a future.”