Was our Lord Jesus Christ harsh to this foreign woman?  Did he try to keep his distance from a woman who was not part of the religion and the culture of Israel?  Did he have a negative attitude to people who were not from his tribe?

Jesus travelled to the area of Tyrus and Sidon, now called Lebanon.  He did this as he hoped for some relaxation.  By going outside the boundaries of the Jewish lands, he wanted to escape from troubles with the Jews and with King Herod.  John the Baptist had just been killed by Herod – he had him beheaded – so the times were hard.  And Jewish rightwing theologians – the Pharisees – had just been scrutinizing the theology and practice of Jesus and his disciples.   Jesus was not strict when it came to the Jewish food laws, in the eyes of these theological critics.  So Jesus needed to withdraw a bit, and he went to the area of Tyrus and Sidon.

If you were a very strict Jew, it was much better to live with your fellow Jews only, in Israel: to avoid problems, to avoid that pagans would impact your children, to avoid being impure by touching impure people.  So for Jesus to go to those pagan areas of Tyrus and Sidon was interesting.  He did not close himself up inside his own culture.  A good lesson for us today. 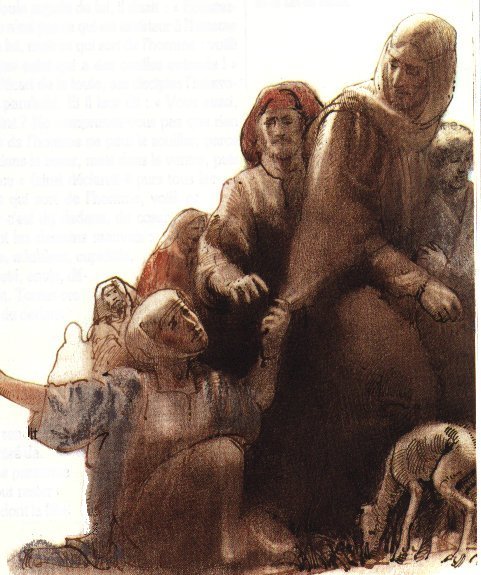 Now it would be easy to read the story of the encounter of Jesus in a very negative manner. As if he wanted to avoid contact with the woman who asked for his help. Initially, he did not answer her question.  He was silent.  I think this silence was not to avoid her, but his way to enter into a real dialogue.  Silence can be a very strong statement.  It was, I think, an invitation to the woman to continue asking for help.  And the silence was also the space that Jesus created for the disciples to speak out, so that he could teach them a good lesson.

Yes, Jesus says, indeed, I have only come for the lost sheep of Israel.  God had sent him to focus on his own people.  Only after Jesus had finished his own ministry, he would send his followers into the whole world, to proclaim the Gospel to all nations.  Jesus had to concentrate on the people of Israel, but this Canaanite woman would not have “no” for an answer.  She entered into the silence of Jesus and saw it as an invitation to continue asking for help.

“Lord, I am just a dog.  But do the dogs not eat the crumbs from under the table?”  We pray those words often in our church – in the prayer of humble access before Holy Eucharist.  “Lord, we are not worthy, but please allow us to come.”

And because the woman insisted, Jesus warmly commended her faith.  She was a foreigner, an outsider, impure, unclean, from the wrong culture and religion.  But Jesus welcomes her warmly – because the church of Jesus has very blurry edges.

I had an interesting experience about this a few weeks ago, when I was in Egypt.  One of the members of the church where I used to be a priest, wanted to meet with me.  So I met with this young gentleman from India.

While he was smoking his shisha – the waterpipe (his wife allows him one per week) I had my cappucino. This man had been coming to church for about 2 years maybe.  First his wife started to attend, and a few weeks later he also came to church.  Nice people.

She always came to participate in Holy Eucharist, but he never did.  So I spoke to him once to kindly invite him.  “Really, can I”, he asked me surprised.  I told him that you do not need to be a perfect Christian, because in Eucharist it is the perfect Christ who graciousuly reaches out to us.

So since then he always knelt beside his wife to have communion, and both came to every Bible study as well.  Nice, active church members.

The kind young man, he put his shisha down and told me: ‘Please do not be upset, my wife told me you will be upset… but do you realise I am a Hindu!”

I laughed.  What a priest I am, with our small congregation, to never have realised this!  Imagine.  I really laughed.  And my friend was relieved.

And he told me he wants to become a Christian.  Good!  And I asked him why.

“Because in church, and especially at holy communion, you treat all people as equal – rich, poor, from whatever culture we are from, in church all are the same.  All kneel beside each other, whatever your status in life.”

He compared this with the caste system in Hinduism where people are not seen as equals at all.

And he wants to be part of the community of the church now.  Through the sermons and the Bible studies he has already started to believe what we Christians believe as true and important, but he still has a few questions.  I hope to soon baptise him.

Now had I known that he was a Hindu, I would never have invited him to participate in Holy Eucharist. People have to be baptised in the name of the Father and of the Son and of the Holy Spirit.  I repeated this often enough in our church.  But had I known that he was a Hindu, and had I drawn the walls of the church high and solid, to separate between us and him, I doubt that he would have become interested in the Christian faith.

Without giving up on our clear Christian beliefs and views, we are true followers of Jesus if we keep the edges of our church community somewhat blurry.  If we welcome people of all sorts without creating an us-versus-them feeling.  And I think as a Church, as Christians, we should also be the first to also show this attitude in our society.

And the reality is clearly, that people will be much quicker to become “us”, to become like us, to believe as we do, when we treat them as “us”.  If we treat people as “the other”, we create distance.

As Christians a very central tent of our faith, is that we have been saved by Christ embracing us.  Unilaterally.  He embraced us before we even believed in him.  In Holy Eucharist we celebrate this.  God gives himself to us.  So it is the expression of our faith that we also have our arms wide open for people who are different from who we are.  This has nothing to do with giving up on our apostolic faith.  It is the best expression of that faith.  It is called love.

For Jesus, the faith of the woman was crucial.  He answered her, “O woman, great is your faith!  Be it done for you as you desire.”  And her daughter was healed instantly.

By meeting with Jesus, our faith grows.  By meeting with Christians, people are supposed to also get a glimpse of Jesus, so that they are challenged to believe with us.  Our meeting with “others” is crucial.  Is this not a crucial need in our days?

We live in a very fractured society, where many people usually have enough money but where many have a great lack of people around them who just love them as they are.

That is a good task for us this week.  If Lent only means no wine or no meat for us, then it is rather selfish.  Just about God and me.  But Lent should also be doing away with our tendencies to keep people who are not like us at a distance.  Be the hands of Christ, be the arms of Christ, be the words of Christ for people around you.

Yes that is hard. But one of the lessons of the story of today, is that if we pray to Jesus, and we insist, he actually answers.  So let us pray to our Lord that in our own community, we are people of reconciliation, not of division.  And that as a church community, we will be able to contribute to the wellbeing of the people around us, and to the country where we live.

And also that we individually will be real representatives of Jesus, who never pushed people away, but whom we see eating and having community with all sorts people, even with people we, naturally, do not like at all.

That’s tough, but that is the way of Jesus.