How much more shall the blood of Christ…
purge your conscience from dead works to serve the living God.
[Hebrews 9:11-15]

Lent is a pilgrimage to Jerusalem with Jesus.

On that journey, in the last few weeks, we have had these confrontations with demons – first Jesus himself, with his temptations by Satan in the wilderness, and showing us in these core responses to the devil in his fast, how we can see through the lies and deceptions.  Then we met with people who were oppressed by various demons.

This morning that battle between truth and lies, between the Spirit of Truth and the devil, is unveiled in an intensification of the battle between Jesus and the religious authorities.

Our Gospel this morning is the end of a longer dialogue that Jesus has with the scribes and Pharisees in the Temple that began with the scribes and Pharisees bringing to him a woman caught in adultery…  That short confrontation ends with the authorities backing down – they could see that Jesus both upheld the Law and that he upheld the need for mercy, because all stand condemned under the Law.

But then there are continued challenges in this eighth chapter of John leading up to today’s Gospel [John 8:46-59].  It is painful to read.  Because even when some of the scribes and Pharisees believe him, Jesus seems to draw out from them, by increasingly provocative statements, a negative reaction towards him, concluding in today’s words – “‘now we know that you have a demon’…and they picked up stones to throw at him.”

Why does Jesus not stop when it says that some of them believed him?  Because Jesus wants to draw out all of the poison from their hearts, all of the armour in which they trust, all the ideas that bind them and keep them in a kind of slavery, keeping them from the full flourishing that they and every human being desires.  He reveals the murderous intent of their hearts.

There are three questions that come from this:

First, what are the ideas that are keeping you and I bound in a kind of slavery?

Remember two Sundays ago, Jesus described those bound by a demon as trusting in some armour and that deliverance from evil comes by taking away that armour in which the person trusted. [St Luke 11:14f]  Is there some armour that you are trusting, some idea you are holding onto, that came to mind?  Did the Spirit just show you something?  Keep that in mind, perhaps it can be dealt with this morning.

In this morning’s Gospel Jesus says, “If I tell you the truth, why do you not believe me?  Whoever is of God hears the words of God.  The reason why you do not hear them is that you are not of God.”

Jesus is challenging these scribes and Pharisees at the very core of their being.  Now it is surely true that we are all made by God and that we are made in the image and likeness of God.  So how can Jesus make such a statement – that these teachers who had stayed around to listen to him, and earlier on even believed him, “are not of God”?

Jesus knows that God has made them.  And it is certain that Jesus loves them, that he doesn’t want them to continue to hold ideas that are false, that he sees in them also something deeply broken, that he will even die on the Cross for them, saying, Father forgive them for they know not what they do.  And we don’t know the final story of these particular individuals – did some of them or all of them later convert?

But what is scary here is that they and we can profess to believe in God and to be upholding true religion and yet be completely confused, having lost sight of who God is, and even seek to supress the Truth when it is revealed in the flesh.

We’re being asked to really look deeply to see what is at the core of our decision making: are we are lovers of the Truth, of the Logos, of the Word made flesh, or are we lovers of some truth of our own making?

Earlier in John’s Gospel Jesus said to the Scribes and Pharisees,  You search the Scriptures because you think that in them you have eternal life; and it is they that bear witness about me, yet you refuse to come to me that you may have life. [John 5:39-40]  They loved the Bible but it was not leading them to recognize the Truth.

We can all give ourselves over more fully to the Truth.  We should all have a certain scepticism about what we say with our lips, if our lives are not outwardly revealing a Christ like walking and relating to others.

The Jewish leaders claimed to be believers of God and lovers of God, and yet when God confronts them in the flesh they desire to put him to death.  There is murder in their hearts, the same foundational murder that was in Cain to put to death his brother Abel.

Do you see an inner rebellion in you that fights against the Truth?  I see it in myself.  The Church calls on us to hold these foundational stories in the Bible before our eyes, stories like the Fall of Man, of Cain and Abel, of David and Bathsheba, of the repeated exile and return of Israel to the Promised Land, and especially of the passion and death of Christ.  We keep these before our eyes because the Bible suggests that there is murder in all our hearts, a suppressing of the truth, an inner rebellion that we must be aware of and overcome by the grace of our merciful Saviour. [see Genesis 4:1-16 and Matthew 15:18-19]

Why do we hold so tenaciously to untruths, so that we are willing to put the Truth to death rather than accept it?

Jesus described holding onto lies as a kind holding on to the devil’s armour.  And it is hard to let go of armour.  We trust in it.  It may have even been helpful for us to survive in the past some suffering that we experienced.  We hold on to that armour, to that idea, and it holds us back from a more deep following of the Way, the Truth and the Life.

Imagine having been a Scribe or Pharisee who has been trained in all the best learning of the day, they have ascended in the religious schools and are now in positions of authority and they are being shown up for their lack of understanding of the Law, of justice and of mercy, of the purpose of the Sabbath, of what God’s liberation will look like, of the whole sacrificial system that has become corrupted, of confused distinctions between Jews and Gentiles.  They were holding onto some pretty serious armour.  To give it up meant giving up much of how they viewed the world, ideas they associated with their very being.  To let it go is a real death.  What will come in its place?  [Think of St Paul’s conversion and how he gives himself a new name.]

What about you and I?  What is the armour we’re trusting in?  Is it time to give up some of that or all of the unhelpful armour?  Well, God is merciful, he reveals the truth to us as we can bear it [John 16:12, 13], so we don’t have to give it all up at once, but let us lay down some of it today, and trust a little more that God will replace that armour with something more robust, something that allows us to continue to grow, a new shield of faith [Ephesians 6:10-20].

It takes courage to step out and to give up that false armour, that lie.  Maybe each one of us this morning can think of one lie we are holding on to and lay it down today and step out in faith and trust in Jesus.

How can we get let go of these false ideas?

What can we do about these bindings, this inner rebellion at the core of who we are?

When Moses was called to established the first covenant between God and Israel [Exodus 24:4-8] he instituted it in a powerful way – in a way that the people would never forget.  They sacrificed oxen and threw half of the blood, this sign of life, on the altar, then Moses read the Covenant and when the people agreed to it, he threw the other half of the basin of blood on the people.  Imagine being there to see the sacrifice and then being covered in that warm scarlet blood. 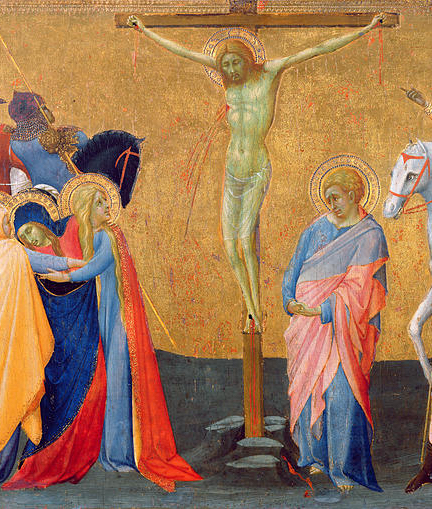 We, Sunday by Sunday, do something similar – we renew our Covenant.  We make our sacrifice in some way to be a Christian, even coming here this morning, we hear God’s Word written read to us, his New Covenant, and we can choose to respond in faith by saying the Creed, or if that is too much for you, we can at least ask God for forgiveness, sacrificing some unhelpful armour we’ve been trusting in, and then trust in the greatest sacrifice that has ever been made, and made for us, to inaugurate the New Covenant.

And God will respond to assure us.  We have come here this morning, to Jesus, the mediator of a new covenant, and to the sprinkled blood that speaks [an even] better word than the blood of Abel. [Hebrews 12:24]  Jesus’ blood will wash away the murderous intent of our hearts against the Truth.  He will purify not just our outward lives of destructive actions but even our consciences from dead works to serve the living God. [Hebrews 9:11-15]

And I tell you, I don’t know what will become of each of us individually or what will become of us as a local church and as members of the one, holy, catholic Church.  But something profound happens as the doors of our hearts are opened ever wider to the Truth.  The Truth, we are promised, will set us free.