Jesus …was transfigured before them: and
his face shone like the sun and his garments became white as light.
[Matt 17:2]

We celebrate today the Transfiguration of our Lord.

In July I was on holidays and had opportunity to worship on Sundays in different churches – as well as worshipping in other Anglican churches, I’ve been able to attend services in the Syrian and Russian Orthodox churches in Amsterdam, services in the Armenian Apostolic Church when I travelled there, and yesterday, saw the liturgy at the Eastern Rite Catholic monastery of Chevetogne in Belgium.

We always have things to learn from the different churches, and one of the things the Western churches learned to celebrate much later (15th century) than the Eastern churches (10th century) was this Feast of the Transfiguration.  One thing that strikes me in their worship is the greater focus on the mystery and on the hiddenness of the Divine, that becomes manifest in Christ as we are made ready.  (e.g. the use of the iconostasis (a screen covered in icons with gates that are opened or closed) (Orthodox) or the use of veils or curtains (Syrian and Armenian) to hide at certain points in the liturgy and then to reveal what happens at the altar, the greater use of incense.  A simple example in the Western Church that reflects a loss of appreciation of this portrayal of the mystery in worship is West facing celebration at the altar.)

This hiddenness and then revelation is surely one of the things taught to us by our Lord in his Transfiguration.

Now if you have a beloved, your spouse or perhaps a very close friend, you know that you are still learning things from one another, even after years.  We cannot reveal the hidden things of who we are at a deep level until we have confidence that the other person will treat that revelation with the care and the confidentiality it requires.  Maybe it is something which we ashamed or embarrassed about, or maybe it is something which is very close to our heart, something of great beauty, something saved until the time is right for it to be shared.

Now we know that our Lord has nothing to be ashamed of, but He does have much that he would share that is of the greatest beauty, but he cannot reveal everything at once of what he knows or of who he is, but only as his disciples are ready.  Jesus did not reveal Himself to all the disciples but to three chosen witnesses from within that chosen few: Peter, James and John.  And Jesus knew the time was right only after Peter had come to see, by grace, and to confess, that Jesus is the Christ, the Son of the living God.

Our Gospel begins, “Six days after…”, referring to the six days after the moment of Peter’s confession of faith.  So it is that Jesus took these three witnesses aside to show them or to confirm to them something of who He is.  It is not that Jesus is changed here in the Transfiguration to become something that he was not before, but that the radiance of the Divine in Christ, normally veiled in human flesh, was momentarily allowed to shine forth, to be seen.  And they saw something of the uncreated Light of Light, something of Jesus’ majesty.  Peter says later in one of his letters that he is not following “cunningly devised fables” but this is his personal testimony.  Peter says in his letter “…we were eyewitnesses of his majesty…For we were with him on the holy mountain.”  [2 Pet 1:16-17]  And John in his gospel would no doubt have had this moment in mind when he wrote:  “And the Word was made flesh and dwelt among us, full of grace and truth; we have beheld His glory…”   [John 1:14]  In that moment the Sun arose, the Dayspring from on high, was momentarily revealed! [Psalm 19:5-6, Luke 1:78]

This showing forth of the glory of God in Jesus Christ another confirmation to us that Jesus is fully human and fully Divine.  It is a vision of the reality that Jesus suffered in the flesh, being human, and yet could also say, “I and the Father are One” [St John 10:30].

The celebration of the Feast of the Transfiguration at this time of year fits so well with our Sunday readings as we turn our minds from the putting to death of disordered passions, our focus in the earlier part of the season (Trinity 3-9), to our current focus on the inward illumination of our souls by grace (Trinity 10-16).

St. Paul has told us (in Trinity 4) that the sufferings of this present time are not worthy to be compared with the glory which shall be revealed in us.  And we also have heard (in Trinity 8) that we are the children of God.  And if children, then heirs; heirs of God, and joint-heirs with Christ; if so be that we suffer with him, that we may be also glorified with him.

The Transfiguration is a glimpse of who Jesus is, but also of how we can be taken up into God, how God will dwell in us, and fill us with His glory – as our souls are made ready.  It is the vision of what is called in the Eastern Christian Tradition, our deification – not our becoming God, but God indwelling us – like a poker placed in the fire, remaining intact in outward form and yet then infused with light and heat.

This moment of Transfiguration should remind us of an event in the life of Moses.  When Moses came down from Mount Sinai with the two tablets of stone containing the Ten Commandments – the Scripture says, “the skin of [Moses’] face shone because he had been talking with God.  And when Aaron and all the people of Israel saw Moses, behold, the skin of his face shone, and they were afraid to come near him.”  [Ex 34]

But if we compare the result of Moses’ encounter with God with our Lord’s Transfiguration, we see that it is qualitatively different.  Moses was transformed as if from without and it affected the exposed skin of his face.  He put a veil over his face so that others were no longer afraid of him.

Under the Old Covenant, we have impressed upon us, from without, something of God’s glory.  It is what happens to us as we are exposed to the teaching of the Law of love and seek to conform our lives to the ways of love.  It will affect the outward appearance of our lives in a good way but leaves us also wanting more, desiring the transforming of our hearts as we realize a battle going on within ourselves that we can only lose on our own.

Compare Moses outer transformation with Jesus’ Transfiguration, the radiance was pouring forth from within Him– not only did Jesus’ face shine like the sun, but all his clothes were dazzling brightness.  No veil could ever have hid it!

Under the New Covenant, God transfigures us from within by His indwelling us, beginning in our Baptism and through faith – not only do our outward actions change, but in time also our hearts.  The glory of God that appeared in the tabernacle in the Old Covenant when it was properly ordered [Exodus 40], is the glory that appears more and more in our hearts, in our souls, under the New Covenant as our lives are ordered by grace.

Imagine having nothing anymore to hide, nothing to be ashamed of or to regret, and also nothing lacking in our personhood, complete fulfillment (– where Christ is all in all).  This is the glorified life God is preparing each of us for and which He is beginning to communicate to us, to share with us, even in this present earthly life.

St John captures it when he says, “See what kind of love the Father has lavished on us, that we should be called children of God! …what we will be has not yet appeared; but we know that when he appears we shall be like him, because we shall see him as he is.” [1 John 3:1-2]

We are already children of God by our baptism and faith, are we opening ourselves to the glory to be revealed to us and in us?

The revelation of God’s glory at the Transfiguration of Jesus was overpowering to the Disciples:

And in this moment we catch a glimpse of the great mercy of God towards us – that God is veiled and draws near to us in Jesus Christ so that, in our unreadiness, we might not be destroyed or oppressed by His glory.  Yet God does not want us to back away but rather to draw near.  On the mountain, Jesus, who finds the disciples unwilling to look, with their faces to the earth, touched them saying, “Rise and have no fear.”

The Father tells us, his children, how to prepare ourselves for this glory to be revealed to us and in us, he says about his Son, Listen to Him.  St John says today, And everyone who thus hopes in Jesus, purifies himself as he is pure.

Despite our spiritual weakness, despite the darknesses of our souls and our unreadiness, Jesus says to each of us today – “Rise and have no fear.”

Listening to Jesus, let us now prepare our souls for transfiguration through repentance and faith to be cleansed of our darkness through His self-offering on the Cross, and not only made more ready to see His glory, but to be glorified by His presence within us, filled with His light, as St Peter says, “partakers of the Divine nature,” …and so to shine as the Son and to bear witness to His glory to one another and to the whole world. 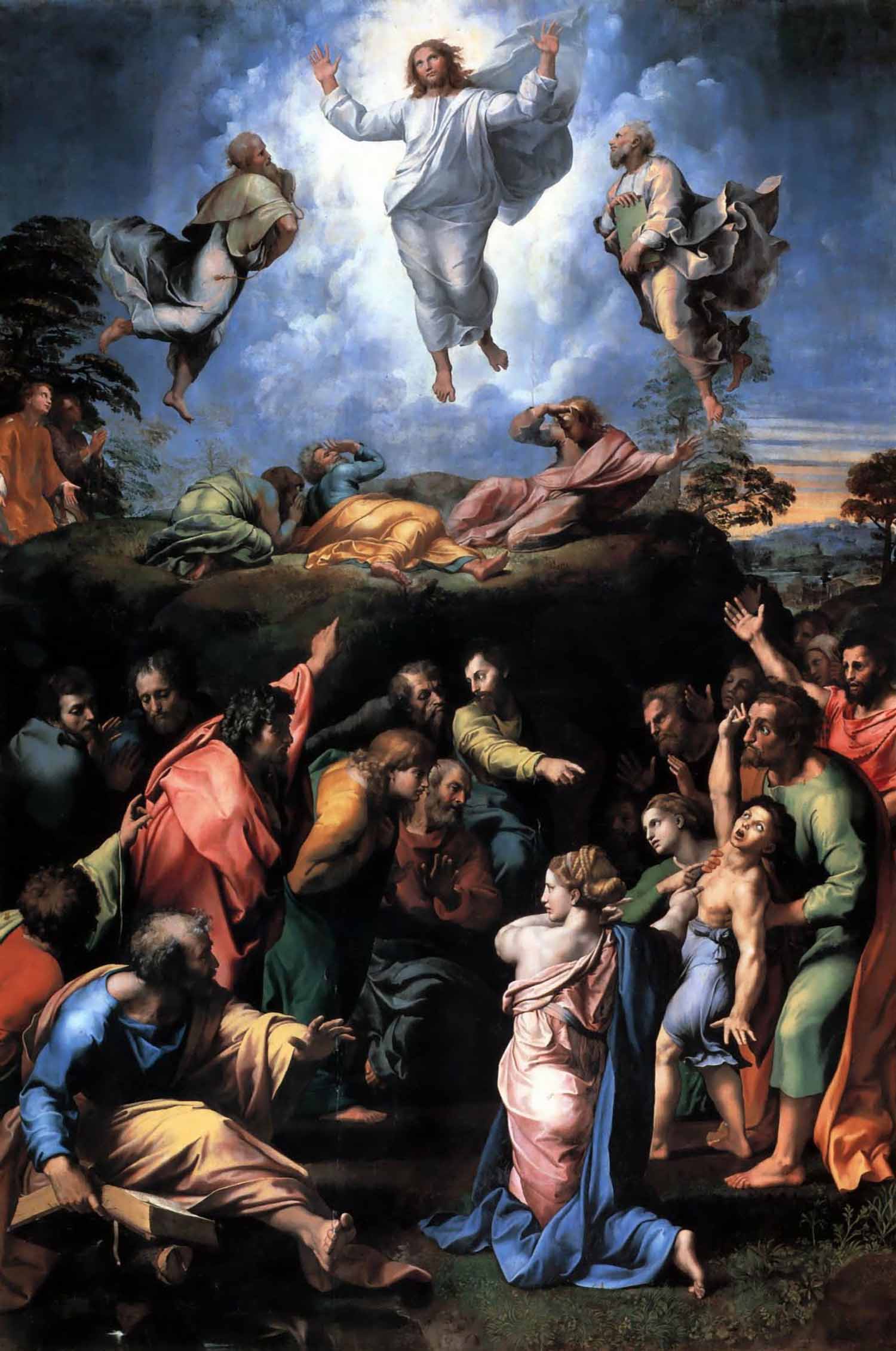