Who is responsible for the horrendous fire in the apartment block in Kensington, London?  Not just a complete building, but many lives have been destroyed.

Who is responsible? The people in the building had complained about a lack of proper fire security systems, but nothing was done by the owners.  And the local city council did not take action.  And maybe the construction company used dangerous cladding.

We do not know yet, but for sure, when people complained, other people looked away.

Just as the rich man in the story Jesus told us, looked away.  Looking away may have dreadful consequences for people who need our attention, and also for those who could have done something but who do not want to see and act.

1 He did not see the poor man at the gate

Shortly before Jesus told the story – a parable – about the rich man and Lazarus, he had made a profound statement. He had spoken about the need to use money wisely.  Luke writes:

The Pharisees, who were lovers of money, heard all these things, and they ridiculed him. And [Jesus] said to them, “You are those who justify yourselves before men, but God knows your hearts. For what is exalted among men is an abomination in the sight of God.” (Luke 16:14-15)

There was a rich man, dressed in purple and fine linen.  Purple and fine linen – this is a description of the robes of the High Priest.  Was Jesus purposely hinting at the lifestyle of the religious leaders in Israel? People who cared about themselves but not about the people?

Religious leaders who had their bibles but who twisted them into their own benefits, instead of using them as a motivation for showing love and mercy.

Purple and fine linen were extremely expensive.  Only the very rich could afford this.  And rich he was – every day he organised sumptuous feasts – dinner parties.

Every day a poor beggar was laid at the entrance of the villa of the rich man.  He was laid there, so he was probably unable to walk.  He was sick, rather disgusting. A stinking man, because of the sores that covered his body.

In our street in Cairo, I sometimes noticed a disfigured man – suffering from leprosy.  It is easy to just look away.  And if such a man is sitting at the gate of your villa, you stop noticing, don’t you?  He becomes part of the landscape and the calluses of your heart grow fast.

The problem is, if you do notice, and look, and you allow the reality to sink in, you realise you have to do something.  If you are rich, and you are able to help a miserable poor man, the laws of Moses, and surely also the words of Jesus, send us out to do something.

But the rich man did nothing.  We know this, because the poor beggar desired to be fed with what fell from the rich man’s table.  In that time there were no knives, forks or napkins. Food was eaten with the hands and, in very wealthy houses, the hands were cleansed by wiping them on chunks of bread, which were then thrown away. That was what Lazarus was waiting for.

Lazarus did not get money. He did not get proper food.  He did not get medical help.  He was covered with sores and dogs came and licked them.  These dogs were not pets. Dogs were considered unclean, wild street dogs that scavenge the garbage, and then nose around the poor man’s sores. It is not a picture of comfort but of abject misery.

And the man was too weak to chase those dogs away.  Or maybe they actualy became his friends. Maybe the dogs were the only help he got.

And the rich man did nothing.  He did not see any link between his life and that dirty beggar at the gate.

2 He did not see the person at the gate 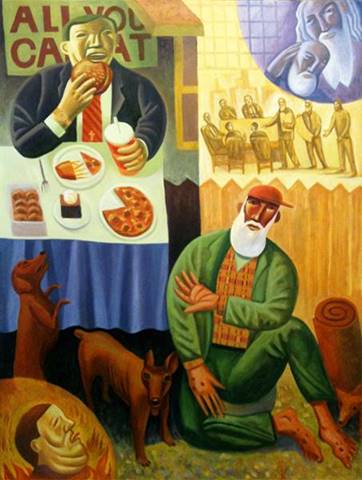 We do not know the name of the rich man, but we do hear the name of the beggar – his name is Lazarus.  That is the Greek version of the Hebrew name Eleazar, which means – God is my helper.

God helps the poor man – but the rich man is the loser in the story.  The beggar is important enough to have a name, while the rich man remains anonymous.  That is the world downside up.  “What is exalted among men is an abomination in the sight of God.” [St Luke 16:15]

The rich man ignored the beggar, and I think he could do this because he ignored the person.  He only saw Lazarus as a dirty beggar, but he did not see the man, the person, the human being created in the image of God, the person whose dreams of a normal life had been shattered.

To dehumanize someone is a very effective way of keeping responsibility far away.  Brand them as an economic issue, a refugee, a beggar, a dirty scumbag, and you shift the focus away from seeing the person.  The human being with his needs.

This is evil – the dehumanization of humans.  And even when the rich man was tormented after he died, he did not see the darkness of his own heart.

But God knows the heart, and on that basis the rich man ended up in a hot place.

Poor Lazarus had been sitting outside the gate in the heat of the sun, day after day, but now the rich man suffered the heat.  And Lazarus was doing great; he received all the comfort a man can desire. 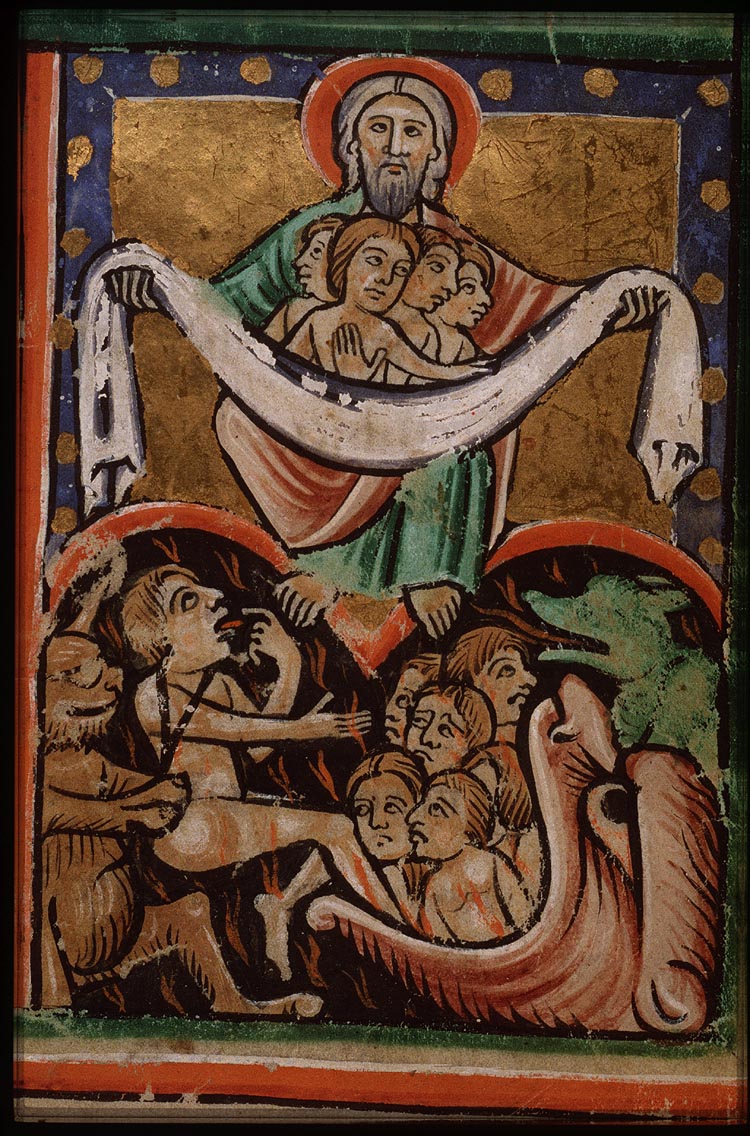 Jesus indicates that there will be a moment of retribution.  The tables will be turned.  There is justice in this God-created universe.

The rich man did not see the problem of his own behavior, even when he was being tormented.  Look what he says to Abraham: “Send Lazarus to dip the end of his finger in water and cool my tongue, for I am in anguish in this fire.”

“Send Lazarus.”  He should serve me.  Look at my background.  And he is just a beggar after all.

And send Lazarus into the fire where I am.  He can suffer a bit for my sake.

That’s the attitude of the rich man.  He still does not get it.  He does not see the human being, the man, the child of God in Lazarus.  He sees him as an item.  A servant.  An economic issue.

We have to wonder how we look at other people.  All people are created in the image of God, and when we serve people, we serve God.

Jesus makes abundantly clear, again and again, that if we have what other people need, our only acceptable action is to see, and act.  Act. Not because of duty only, but also because of love of God and his creation.

What was the sin of the rich man? He had not ordered Lazarus to be moved away from his gate.  He did not stop his servants from throwing some food at Lazarus.  He did not kick him in the passing.  He was not deliberately cruel to him.

The sin of the rich man was that he accepted the poor sick man as part of the landscape and simply thought it perfectly natural and inevitable that Lazarus should lie in pain and hunger while he wallowed in luxury.

His sin was that he could look on the world’s suffering and need and feel no grief and pity in his heart; he looked at a fellow-man, hungry and in pain, and did nothing about it.  He was punished for not seeing.

Who are the people that we do not notice?

Do we even see these people, do we notice them as valuable humans who are entitled, entited to our love, help, support?

3.  He did not see God’s provision

But finally the seriousness of his situation sinks in, and the rich man begs Abraham to warn his five brothers.  “Tell them that they must use their wealth, their time, their energy, for the sake of others and not for themselves!  Tell them to serve people in need!”

He now realises, that repentance is needed.  Good.  But too late.  And he also knows from personal experience that his family does not take seriously what the law and the prophets say.

Jesus came back from the dead – did this make a difference? Not automatically.  Having the law, knowing Jesus, speaking of his death and ressurection, repeating his words every week in church – does that actually change us and impact our lifestyle?

Only if we open our eyes and if we are prepared to act.  Have an open eye for the needy aorund you.  No, not for the needy, for the person who is needy.

Wealth is not bad. After all, Abraham was wealthy. But wealth brings with it certain responsibilities, a certain stewardship.  We are asked to account for how we handle the wealth God has given us.

Let us thank God for all our blessings; we have so much.  And let us ask him to give us open eyes and a heart for the poor and suffering, the many needy people around us.  May he strip away the calluses that we have build up to protect ourselves from the hurt and pain of others.

Let us love people as Jesus loved them and loves them now.  If he loves us and cares for us, in spite of our many imperfections, how can we close our eyes, our hearts, our life, for those around us who need us?