And when they had brought their boats to land,
they left everything and followed him. [Lk 5:5-6]

As we gather on this weekend of the Tour de France (departs from Utrecht this year!), there is a great focus on who will win.  And though I haven’t watched television recently, I can imagine that there are at least a few interviews and discussions about all the preparations that particular cyclists have made.  Each one of the great cyclists over the past few years will have been looking intently on what it is that could hold them back, both physically and psychologically, including a careful examination of their fears – so that they might be as fast as possible – the fastest!

In Trinity season we are also looking at what it is that might hinder us from our growth in the spiritual life, our growth in holiness.  Our training in the spiritual life also includes a consideration of all that we do physically and spiritually.  For example, in relation to the body, St Augustine said we should approach food as a kind of medicine, learning which and how much foods enable us to be most loving – not too much, not too little.  We could think of how the right amount of sleep will enable us to be more alert in prayer.  There are many considerations we can take of how to care for the body that will affect our spiritual life.

But we know that there are matters also in the soul which are more complex and often unknown to us, things that hinder us from a greater engagement, a deeper, more wholehearted following of Jesus.

In today’s readings we have examples of the way fears in our souls can inhibit our growth.  Let’s consider whether one of these applies to us – maybe we will find ourselves being released in a sense, experience a new liberty in God, as what is hindering us is exposed.  Let’s allow Scripture, the finger of God, to point it out to us.

In our first reading, we have the account of the call of Elisha. Elisha is the one who takes over from the prophet Elijah.  Elijah had been pursued relentlessly by Queen Jezebel’s army, she wanted him dead – and Elijah was exhausted and hiding in a cave.  But God reveals by a still… small… voice, who it is that will take over from him in the ministry as prophet of God to Israel, and so he leaves the cave, fear overcome, encouraged once again, to fulfill God’s plan. 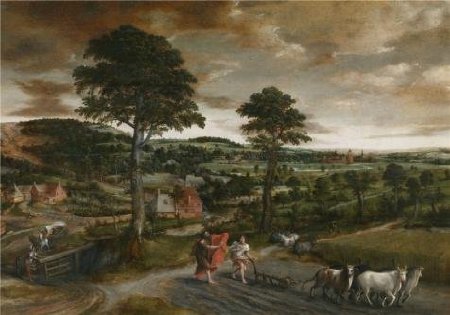 Elisha is that person who will take over. He has some wealth – with twelve oxen.  It seems he must have known of the ministry of Elijah – because as soon as he is touched by Elijah’s mantle, he leaves everything to follow him.  Elisha slaughters the animals through which he made his living, and cooks them up on a fire using the wood from the yokes and makes a feast for his family and the whole community from which he came – there is no turning back for Elisha, he wanted a clean break.

What is it that made him go?  What is it that took away fears and released the energy in him to suddenly follow wholeheartedly?  It was surely that the holy man, Elijah, by his actions, made Elisha certain he was being called directly by God – what could be more exhilarating?  And if God is calling, surely God will provide his daily bread.

God wants to release in each one of us all of our bundled up energy for the building up of his kingdom.  If we’re spinning our wheels, or plodding along to vain ends, let’s pray to know His calling in our lives, to be touched by the mantle of Christ!

Peter speaks to us today in his letter about fears that may inhibit us in our Christian lives when we are with other people – the way in which we can be discouraged because of destructive encounters with others in the church or in our families.  Our temptation can be to withdraw, or to be less engaged, to avoid being hurt or to even to hurt back.

But rather than fleeing from our brothers and sisters, we are called to stick with each other – and take action that is the contrary to what the old Adam in us would be tempted to do – St Peter says, do not repay evil with evil or reviling with reviling, but on the contrary, blessing.  It is in this very engagement, that hardened hearts are softened, that our souls are converted and the souls of our brothers and sisters, by the example of Christ-like patience in the face of evil – in the church, in families, in marriage.  But it requires a kind of knowing and willed engagement in the struggle to love, keeping our eyes on Christ, being continually encouraged by Him.  (But this is not a call to remain in an abusive situation – seek counsel from a wise Christian if your well being is being continually undermined.)

Just keep stepping out in love, says St Peter.  Have no fear of them, nor be troubled, but in your hearts honour Christ the Lord as holy. 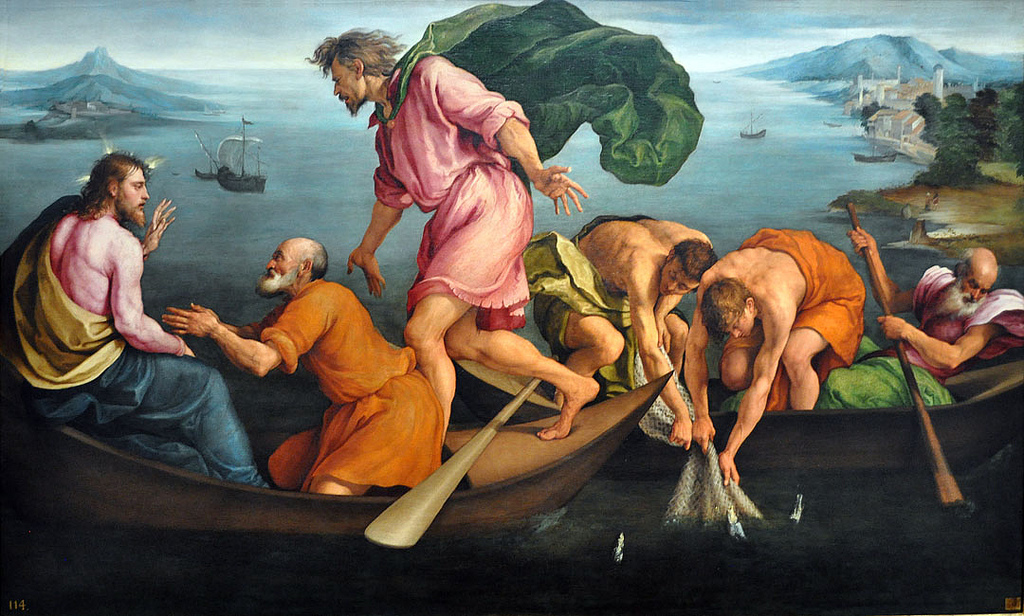 In the Gospel today, Peter, James and John had fished all night, they had found nothing and were no doubt feeling dispirited, dejected.  They were interested in a way, in what Jesus had to say, they allowed him to teach from their boat, but they were only partially convinced, what they still really wanted, was a big catch of fish – and Jesus knew it.

And when Jesus had finished speaking, he said to Simon, “Put out into the deep and let down your nets for a catch.” And Simon answered, “Master, we toiled all night and took nothing!  But at your word I will let down the nets.”  And when they had done this, they enclosed a large number of fish, and their nets were breaking.  They signalled to their partners in the other boat to come and help them. And they came and filled both the boats, so that they began to sink.

It is as if Jesus is saying – OK, I can see that this is what you really are still wanting – voila, but it’s really no big deal – it is just a bunch of fish.  That’s not what is really important to you.  Let’s think about what we are trying to achieve by our work – suppose it was suddenly all ours – would that really satisfy us?  Jesus is saying there is some work that will truly engage us.

Later this year we are planning to start a new church in Amersfoort with a portion of the congregation from Holy Trinity.  That means we will also need to think also about replanting this church here in Utrecht.  It is a kind of push to every one of us – whether here in Utrecht or in Amersfoort – to be engaged in evangelism in a more self conscious way.  What is it that might hold us back?

When Simon Peter saw [the miraculous catch], he fell down at Jesus’ knees, saying, “Depart from me, for I am a sinful man, O Lord.” For he and all who were with him were astonished at the catch of fish that they had taken, and so also were James and John, sons of Zebedee, who were partners with Simon.

Peter sees the divine hand at work, and at the realization of the nearer presence of the Divine in Jesus, he sees also his sinfulness. He cries out, Depart from me, for I am a sinful man, O Lord.   There is this moment when Peter thinks that God hasn’t really seen who he is inwardly, with all his brokenness, with his sinfulness – and he wants to be honest.  When Peter falls to his knees before Jesus, our Lord quickly calms and encourages him, as He desires to calm and encourage each of us today: Do not be afraid! Do not fear judgement, do not fear rejection by God.  God has a plan for each of us, and for our church – and it is very good.

The imagination of the disciples was opened up and they were captured by the vision of the breadth of the mercy of God and the openness of God to engage them in His work – And when they had brought their boats to land, they left everything and followed him.  They didn’t think, well what could I share? what do I know? How could I possibly be an example of Christian love to convert others? They left everything and followed him.  I think we know something of the excitement of that moment, we feel its liberty and we want more of it.

When feelings of dejection or fear come upon us that hold us back, let’s discern their source and, if it is an ungodly fear, let’s call upon Christ to battle those fears for us.  The impulse to withdraw or to stop loving our neighbour because we’ve been hurt before, the impulse to consider ourselves unworthy of the divine call to evangelize, the impulse to despair that we can be forgiven – in the shining light of Jesus Christ, we respond to these impulses by new acts of courage.

Is the Spirit of God working in you, today, to release you from fears?

Today, wine and bread will become for us Christ’s Body and Blood.  Jesus knows our hearts even better than we do – the good and the ill – and he invites each one us to feast in the Kingdom of heaven.  He will not just touch us with his mantle, he gives us his very self.

Let’s be encouraged by Jesus’ example of love in the face of the whole world’s hatred, by His perfect forgiveness of all our sins, and by His expressed desire to engage each one of us in our true vocation.

Do not be afraid; from now on you will be catching men.