We are continuing our spiritual ascent in Trinity Season – we’re looking at the flourishing of our souls in Christ.  Last week we began to think about “spiritedness” in the soul.  Spiritedness is that bounce, that zest for life, being ready for adventure – we see it in healthy animals, we know it in ourselves when we are full of energy – we see it and value it especially in the youth.  It is a wide-eyed enthusiasm ready to take on the world.

While spiritedness is a gift of the soul’s creation, that enthusiasm and energy can be good or destructive, depending on how this “fight or flight” response to a perceived danger is directed.

Last week we saw the flight response – how we can be led to flee from others and even from God out of a perceived threat to our safety. That very natural reaction needs to be held in check and even countered at times in the light of Jesus Christ.  [Not running away from those who revile but responding to evil with blessing, not running away from God out of fear of condemnation but rather drawing nearer.]

Today we look at the natural fight response to a perceived threat.   We can have lots of spiritedness in the soul when we are angry, but it can be expressed in a very destructive way – in unrighteous anger or wrath.  Anger is exhilarating, we can feel so alive when we follow this passion.  But in today’s Gospel [St Matthew 5:20-26], Jesus warns us about the dangers of anger in us.

So do you see how holding anger towards another person is a kind of committing of murder?  Our intention in expressing it, is to take away from the spiritedness, the liveliness of others, it is a diminishment of their life.  Think of an abused child always cowering, walking on eggshells waiting for the next outburst of anger – a tragic diminishment of life.  And in a less extreme case, have you ever been in a room with others with someone who is angry at you – how it takes away from the joy of the gathering?  The cool stare, hatred unexpressed verbally, but you cannot function as you would.

And we know all too well how when we hold unresolved anger towards one person, it can spill out in our dealings with others who had nothing to do with the offence.   When we are angry, we cannot reason as clearly.   This also shows itself in an inability to respond to the perceived injustice done to us with a measured reply – our response can so easily be over the top.

So if anger can be so destructive, why do we experience it?  Anger is a natural human response that God has given us to a perceived threat.  Jesus doesn’t say all anger is bad, but whosoever is angry with his brother without a cause.  Anger can be a manifestation of love – it can be a gift to react quickly to an injustice.  Our Lord was angry with the Scribes and Pharisees who were the blind guides – he explained clearly why and how they could be redeemed [Matthew 23:13-27]; he was angry with their hardness of heart when they would fault him for healing a sick man on the Sabbath – he revealed their hypocrisy and healed the man in front of them [Mark 3:1-6]; he was angry with the desecration of the Temple in Jerusalem – he explained why, My house shall be a house of prayer but you have made it a den of thieves! – and made a whip of cords and drove the money-changers from the Temple [Matt 21:12-13].

The Apostles likewise expressed their anger at the false teachers who undermined the faith of the flock.  But their response was always measured, always reasoned, they sought by word to speak clearly the truth into the situation to reveal and stop the injustice.  Be angry, says Paul, but do not sin: let not the sun go down on your wrath [Eph 4:26].

Anger, whether we have stirred it up in another or if we have anger in ourselves – we should attend to it as soon as possible.  If we don’t, we can come to enjoy being angry, and to feed on it inwardly, it can easily bolster our pride and feelings of self-righteousness.  The adrenaline rush can make us feel alive – there can be a release of great energy, spiritedness – but it is so easy for our minds to be darkened, our response to be excessive, and we become the subject of God’s judgement.

So how do we attend to anger without a cause quickly when it arises in our hearts?  Jesus says,

Jesus began this Gospel by warning us against having anger without a cause, and one would have expected him to say, so if you have anger, then…  But instead, in his advice that follows he turns it around to make us think if anyone is angry with us.  Why?

First, because anger is so tied up with the experience or perception of injustice, he wants to tackle our own feeling of self-righteousness.  It is again about the inward turn, to remind us of our need of mercy so we will be prepared to give it.  Jesus tells us that if we have done something to make another person angry with us, then help relieve him or her of anger by seeking to reconcile before you go to the altar to offer your gift.  Out of love for our neighbour we do not want to leave them sitting with unresolved anger, it can destroy their souls and it will hurt others around them – [Cain asks, Am I my brother’s keeper?]  The longer they sit with it, the more damage it can do – agree with your adversary quickly.  Out of love we are to do what we can to seek forgiveness – through words and actions to make up for the wrong we’ve done.  If the person will not forgive us, we have begun to do our part – out of love, we keep him or her in our prayers and take the utmost care not to offend again.  Reflecting on the times we have been the cause of anger in others, and what we would like from them, prepares us for what we must do when someone has made us angry.

So what if I am angry?  We need to reflect carefully on why we are angry – we might need to ask Jesus to show you why we are angry, because anger darkens our minds, we often can’t think as clearly.  When we can see why, then seek to resolve the injustice by speaking in clear reasoned words what has made you so angry.  If you have not been heard, then at least you have done what you can to clear the air.  In cases of serious injustice, you might need to seek justice in the courts.  Courts are the place to resolve in a dispassionate way an injustice (a third party, lawyers and judges, can often see things more clearly), and the legal system can help prevent further injustices and in bringing about penitence in the offender.

In the end, we must realize that we will not always get satisfaction for the wrongs done against us.  So ultimately, if we are not satisfied that we have received justice, we can bear with it by forgiveness.

Forgiveness is the highest form of giving, it calls forth something from us that we don’t at all feel like giving – but we choose to do it, asking Jesus for the grace to enable us to do it wholeheartedly.  Ask God to fill our hearts with a love that moves us beyond the ever-shrinking world that unchecked anger leads to, love perverted – directed towards ourselves alone [Dante], once again to move out towards a love of God and our neighbour.  [See the Collect for the day: O GOD, who hast prepared for them that love thee such good things as pass man’s understanding: Pour into our hearts such love toward thee, that we, loving thee above all things, may obtain thy promises, which exceed all that we can desire; through Jesus Christ our Lord.  Amen.] 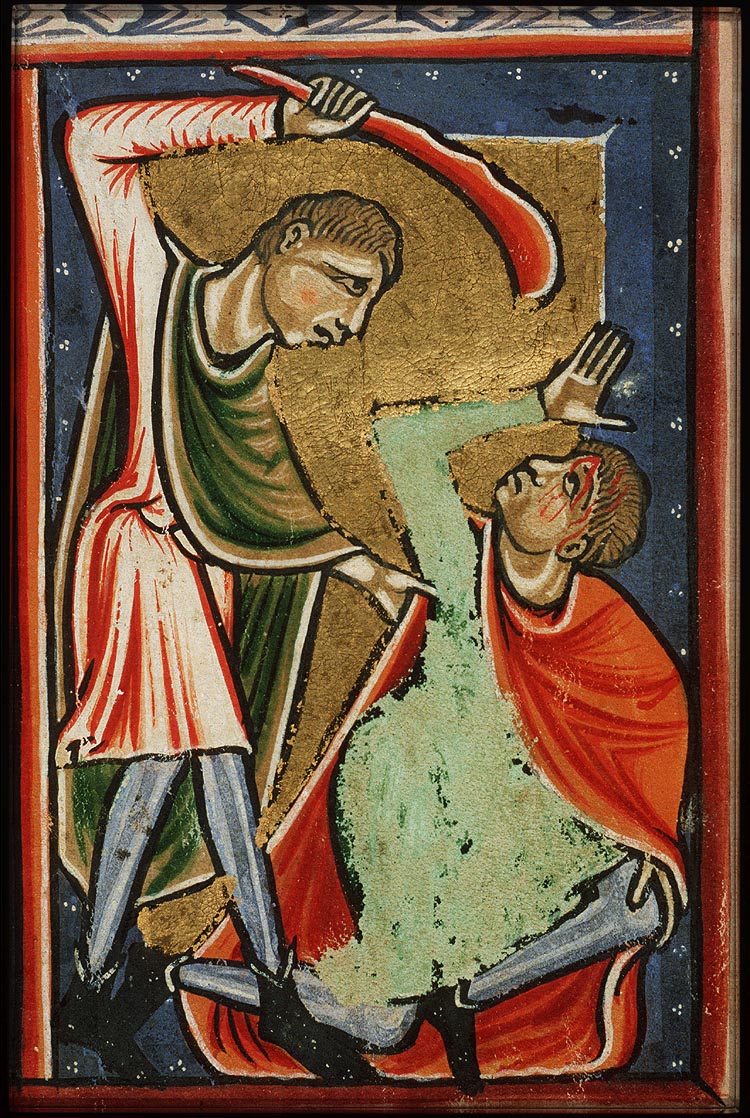 Life is too short for that bitterness of soul that makes us unpleasant to be around, and that in the end will utterly destroy us and hurt those around us.  Should our whole lives and our relations with others be defined by some injustice committed against us?  The kingdom of heaven is not found there.  It is a part of the old man we are holding on to – it is the way of relating to others before the Flood – we become like a wild animal, losing the light of reason – the inward thought of every one of them was only evil continually…and the earth was filled with violence. [Genesis 6:5,11] 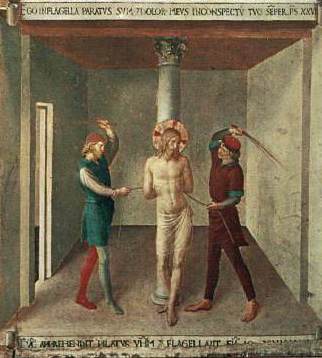 Instead of holding on to inner rage, we put before our minds the tragic end of wrath – even the hurting of the innocent around us – think of Cain who murdered his brother Abel [Genesis 4:2-15], or the Scribes and Pharisees who stirred up the crowds to cry out against Jesus, Crucify him! Crucify him!… Why? What evil has he done?

Instead of holding on to an inner rage, we put before our minds that blessed flood which flows as a never-ending stream from our Saviour’s side as he hung upon the Cross.  We recall those waters of baptism in which that old man, that fallen way of reacting to every injustice done to us, has died and by which our souls were restored and new life can begin once again to flourish in us. [Romans 6:3-11]

As we proceed on our pilgrimage to the kingdom of heaven, we will need the spiritedness that is ready to fight, but only if we are first purified of unrighteous anger, only after we have brought that fight response under the command of a God-inspired reason.  We will need this spiritedness to fight against temptation in our midst when we cannot flee from it.  Paul says we are to fight against principalities and powers of wickedness that we see manifesting themselves as injustices in societies and in the Church. [1 Cor 6:3; Eph 6:12]  We will fight for what is right and for what is true, for justice mingled with mercy, and in a way that is righteous and effective.

God has such great things in store for us if all our spiritedness is placed in the service not of hatred but of love.